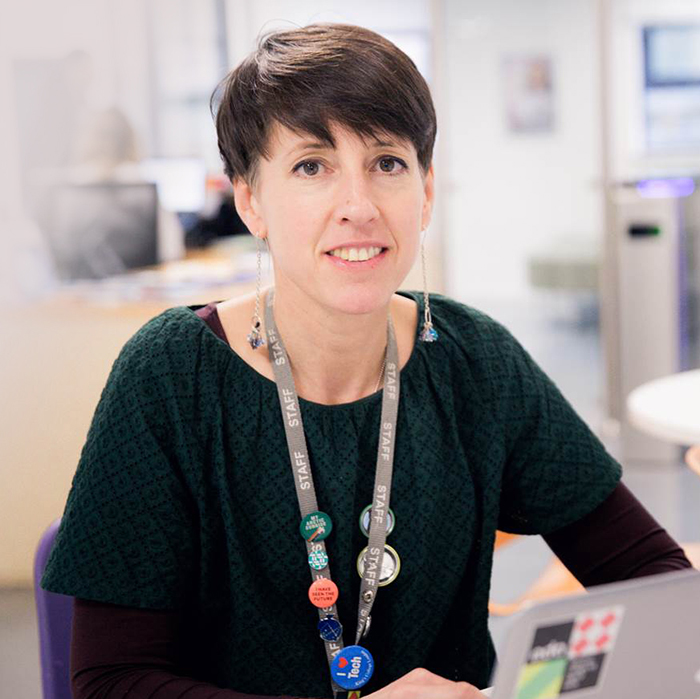 “I had a real wakeup call about elitist attitudes”

The principal of Ada, the National College for Digital Skills, talks to JL Dutaut about growing up on various educational faultlines and her attempt to close the UK’s digital skills chasm

Culture wars rage on social media. Our political consensus is fraught. Elitism, aspiration and social mobility define our public discourse while time and again glass ceilings affecting class, age, gender and ethnicity are smashed and, evidently, rebuilt. The global village brings us closer together, yet society has seldom been so riven with division.

Such are the throes of a world upended by the technological revolution and its profound economic consequences. The rule book is being re-written in real time in algorithmic form, recodified in lines of ones and zeroes few understand.

Among those few will be the students for whom Tina Götschi is responsible. And the principal of Ada, the national college for digital skills, is under no illusion as to the responsibility this represents. She is one of Ada’s founding teachers, and the college’s mission statement – “to educate and empower the next generation of diverse digital talents” – is more than an organisational mantra for her; it is a heartfelt purpose.

When it opened in 2016, Ada was the first new FE college in England in 23 years. Next week, it is expanding its presence beyond London with the launch of its Manchester hub. As Götschi tells me, it aimed to be different from the start. “We have a sixth form, where all our students study computer science, and an apprenticeship programme, where we work with industry partners to deliver degree-level apprenticeships in the digital field.”

To say “that’s the whole offer” would be to seriously downplay the importance not only of its post-18 focus on higher apprenticeships but also the structure of Ada’s sixth-form curriculum. It is similar in some respects to a baccalaureate in that students who join Ada choose from three pathways – “pioneer”, “innovator” or “creator”. 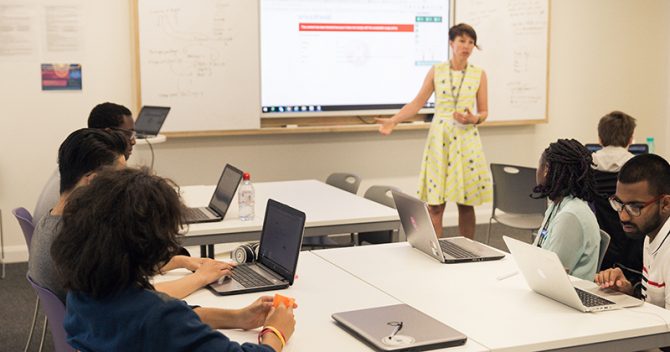 Students’ choice of pathway is guided from the start by possible career destinations. As evidenced by its curriculum, the college, according to Götschi, is in part a response to “a huge digital skills gap, a real driving need in this country that is getting bigger all the time”. As per the mission statement, diversity is also core to its mission – a challenge the IT sector as a whole (if there really is such a thing anymore) is struggling to address.

Amid reports of racist algorithms and concerns about intrusion, data misuse and political manipulation, digital’s claims to neutrality are under siege, and Götschi is no techno-evangelist: “It’s not just about getting on board with the Big Five and adding to that monster that’s eating us all. It’s about having a more nuanced understanding of technology, its good as well as its bad side.”

In practice, this means all students receive in-depth teaching about the ethical dimension of the careers they aspire to. “We expose our students to a lot of debate around disinformation and misinformation, and we do that with big players in technology who are not the big economic players. We do work with IBM and Deloitte and Google, but also with organisations like Mozilla, who are all about openness of access and web literacy for all.” As our interview is happening, Full Fact is on campus, talking to the students about disinformation.

Götschi joined Ada as it launched in September 2016 as its head of computer science. Two years later she became its vice principal, and only a year after that she took its top spot. She is clearly professionally at home here, negotiating the faultlines at the heart of the technological landscape. Her first principal’s blog ends with a link to a Radio 4 interview with author Michael Morpurgo, in which he calls for a rethink of education’s “endless use of data-gathering and algorithms”.

For her new year 12s, these faultlines may yet be difficult to express but, starting their computing course mere weeks after an algorithm spectacularly let down their entire cohort, it is sure to be formative.

As for Götschi, education was marked by other formative tensions. Born in Switzerland to an engineer father and physicist/statistician mother, her childhood was spent moving periodically around the globe following his successive career moves. Her mother had also had a career but remained at home to look after their three children. At the age of two, the family moved to Montreal, and Götschi experienced education policy shaped by the kinds of tensions that arise when the old is threatened by the new. Worried, as Götschi explains, “that children would end up growing up and not speaking any French”, Quebecois separatists had convinced the Canadian government that any child resident in Montreal whose parents weren’t born in Canada should attend a French-speaking school. 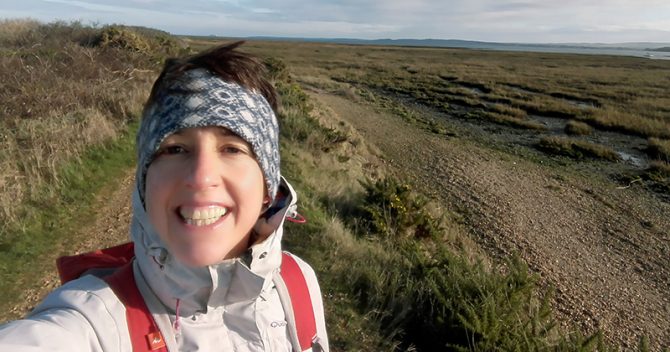 Götschi did just that until grade 6, when the family moved to South Africa. The year was 1983, and apartheid was still in full force. That year, Wikipedia records 24 bombings and attempted bombings, eight limpet mine and two arson attacks, as well as two major offensives by the South African defence forces. That year too, a new constitution came into force, nominally giving a voice to the country’s “coloured” and Indian populations but continuing to exclude the black majority.

“I was 12. So I didn’t really get it. I finished off primary school, and that was a white school. Then when I went to high school, it was a private Catholic school. It wasn’t like fancy private,” she notes, “but it was a mixed school, so I had a very different schooling experience, I think, to the majority of South Africans at the time.”

She is proud to note that she voted in the country’s “first democratic election” in 1994, when the apartheid regime was replaced for good, but she also hints at a lasting discomfort about her situation at the time. “We hadn’t been very political. My dad’s plant was shutting down, so he was looking for something else and they offered him South Africa. I think more politically active people would have said ‘absolutely no way ever’. But, for whatever reason, I’m not judging them, my parents didn’t.” 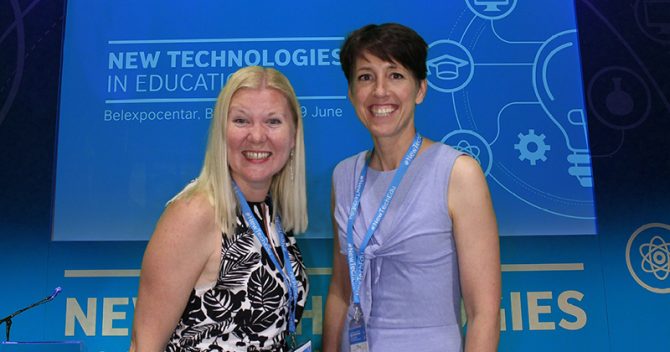 Evidently somewhat of a natural at maths and brought up around computers, she was also encouraged to develop her artistic tendencies by her mother.

When it came to university choices, this duality became an issue. She aspired to be a fashion designer, but says “the reason I didn’t go for fashion design is that you had to do it at what was called a technicon in South Africa [a polytechnic], and I was enough of an intellectual snob not to do that.”

Browsing through Johannesburg’s University of Witwatersrand prospectus, she settled on a course that had an A in maths as an entry requirement. “I thought ‘Oh. Nice. Elitist, I like it’,” she says with a laugh at her younger self. She studied computer science, worked in industry for a few years, then qualified as a teacher. After four years teaching at Sandringham High School in South Africa, she moved to the UK to continue her career here but had to re-qualify. “I started off on the unqualified teachers’ scale. And I had only a small idea of what it’s like when you are crapping yourself because you’ve got five pounds and you need to make that last for another two weeks.”

This difference between FE and HE, A-level and BTEC, it’s that same sort of elitism

The experience was a formative education in itself. “I was so incredibly privileged, and a lot of our students don’t have that. And this difference between FE and HE, A-level and BTEC, it’s that same sort of elitism. I’ve had a real wake-up call that that sort of attitude is fine for the few, but it’s not the reality for most. And yeah, it did take me until I was 40.”

Beside her successful career, she continues to pursue the passion she’s had for textiles since she was 15. She even went part-time to pursue internships with designers and teach coding to corporate clients. Only the role at Ada could lure her back to full-time teaching – which is perhaps the greatest compliment that can be paid to its unique offer.

Götschi has taught maths. And art. In schools. And in FE. She’s been privileged. And on the breadline. Politically naïve. And ethically engaged. She’s been an educational snob, and she is working to undermine that same snobbery.

One thing is certain, she is testament to the fact that faultlines can be crossed and divisions reconciled – and that is the kind of example every student, in London or Manchester, surely needs today.