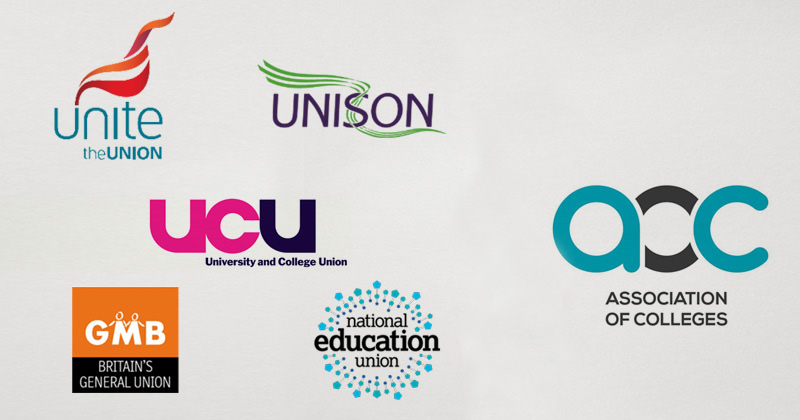 Trade unions have called for a “significant” pay rise for college staff this year, after the government pumped an extra £400 million into the sector.

The University and College Union (UCU), the National Education Union, the GMB, UNISON, and Unite have today launched a new claim for pay levels to move considerably towards what they would have been had pay risen with inflation since 2009 and for colleges to implement the living wage.

The Association of Colleges, which recommends a pay rise percentage for staff to its members each year, said in July 2018, amid negotiations with the UCU, that pay rises would be “contingent on government funding”.

Last November, two months after the chancellor announced a £400 million boost for colleges, the AoC recommended a 1 per cent staff pay rise. Chief executive David Hughes said at the time that his association had calculated that a little less than half of the funding would end up with colleges in the next academic year.

He added that the association expects colleges to have funding allocations for 2020/21 by the end of March 2020 and promised to accelerate a pay recommendation for the following academic year.

While the AoC recommends a pay increase to its members, colleges are independent and make final decision on pay themselves.

UCU general secretary Jo Grady said with the £400 million investment from government, “colleges must now deliver on their promise to staff that they would be first in line when the money arrives”.

Without honouring boosting staff pay, “it will be impossible to attract and retain the staff colleges need to be able to play their role in the national recovery effort”.

Staff there have “a vital role to play in our economy and society,” so “we must ensure their pay reflects that key role, starting with a significant restoration of the real-terms cuts in this pay round”.

The UCU has previously said senior college lecturers were earning almost £10,000 less than if their pay had kept up with inflation. Last year, they held a series of strikes at individual colleges to win pay increases from their management.

As part of their demands, the unions want all FE colleges in England to become accredited living wage employers with the Living Wage Foundation, and for all contracted-out services to be brought back in-house, with terms and conditions equal to those of staff already directly employed by the college.

Association of Colleges chief executive David Hughes said college staff had shown their “remarkable focus on students in their response to this crisis,” and colleges and unions agree it is time to address “longstanding pay issues” in the sector, which he blamed on funding cuts.

But, he continued, “the Covid-19 crisis has brought great uncertainty in terms of income and expenditure for every college, and employers everywhere.

“We need to talk to our members, as we always do, and we will be in a position to discuss this pay claim with unions in due course.”