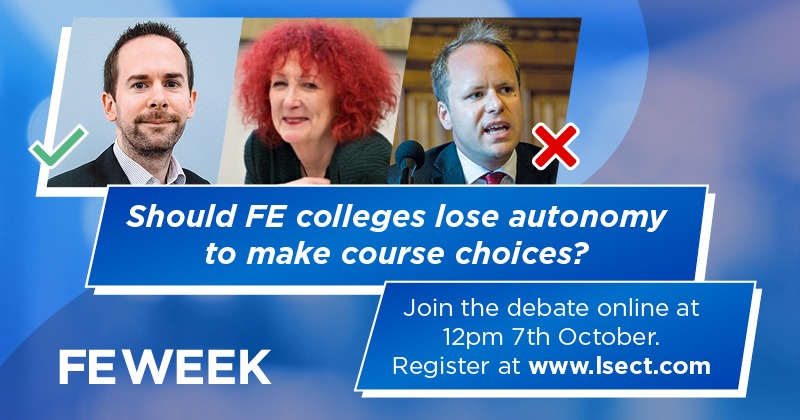 On 17 January 2020, FE Week was first to report that the government was working on new legislation in the form of an FE Bill, which “could mean colleges lose ultimate power over deciding which courses are run”.

Four days later, on the 21 January,  Amanda Spielman, Ofsted’s chief inspector, gave a speech in which she repeated criticisms she’d first made in November 2018. Her argument is that some colleges choose to run courses for financial gain, such as in performing arts, despite the lack of opportunity for progression. This, she said, is giving students “false hope” by putting them on courses where there are slim job prospects.

David Hughes, chief executive of the Association of Colleges, responded directly to the concern and said on the same day at his annual conference: “It does happen and we just need to face up to it.”

But the government still refuse to comment on what will be in the FE Bill or related White Paper (which we understand publication of keeps being put back), beyond saying it will be “revolutionary”.

In September, Tom Richmond, a former adviser to the skills minister and founder of the think tank EDSK, proposed a solution in a report funded by FETL.

Colleges should be stripped of autonomy to choose course offer, in favour of new regional FE directors arranging provision “in line with local social and economic needs, as well as eliminating duplication of courses and promoting specialisation among nearby colleges.

“While day-to-day operations would remain the responsibility of college principals, the FE director will have the final say on important strategic decisions such as the courses and specialisms that each college offers”, says Richmond.

Could new regional FE directors dictating college specialisms and the courses they run be an improvement on the current system? Richmond, writing for FE Week, believes this “the loss of some autonomy for individual colleges is a step in the right direction”.

Join this important debate online at 12pm on Wednesday 7 October , chaired by FETL president Dame Ruth Silver. Tom Richmond will be arguing in favour of the motion for the loss of some college autonomy and Nick Linford, editor of FE Week, will be arguing against.

Register here to watch live and be sent a recording of the session.