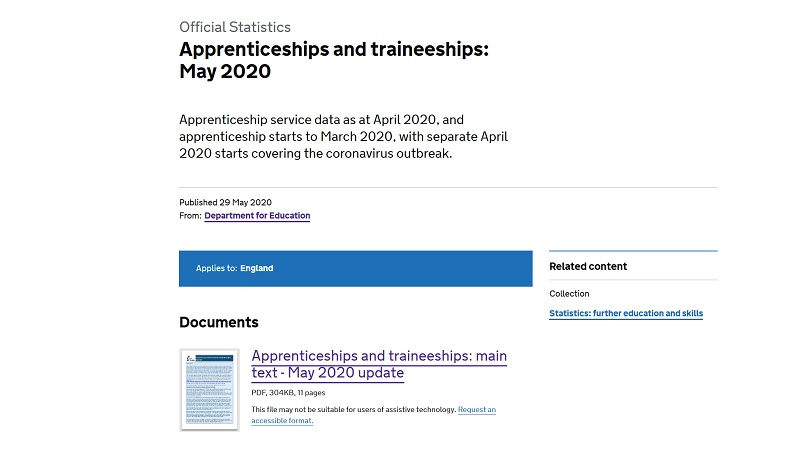 Apprenticeship starts for the month of March 2020 are down by a quarter while April plunged by 72 per cent on the previous year, new government data has revealed.

Monthly provisional figures for both of those months were published by the Department for Education this morning and show the huge impact that the Covid-19 pandemic is having on apprenticeship recruitment.

Opportunities for young people were hit the hardest last month as starts for under 19s plummeted by 87 per cent, and starts at level 2 dropped by 83 per cent.

The data for April chimes with the findings of an FE Week survey that was first to reveal the dramatic impact of the coronavirus crisis on apprentice starts.

The DfE states that it is key to note that in “normal circumstances” the first time a month is reported on it may “typically represent only two thirds of the starts providers go on to report later in the year”, so care should be taken with the data for April as “interpretation of the level and particularly comparisons with other periods risks being unrepresentative”.

Today’s data release also includes figures from 23 March, when lockdown started, to the end of April. Just 13,020 apprenticeship starts have been reported so far between those dates, around half of the 26,330 reported for the same period at this point last year.

The DfE said that Covid-19 has resulted in the closure of colleges and some employers are unable to start or continue apprenticeships as planned.

“Apprenticeship data for recent periods is always subject to a large degree of underreporting but, during the nationwide lockdown due to the pandemic, reporting will be further affected by collections remaining open on a voluntary basis to help reduce burden on the sector and employers,” they added.

Responding to the latest figures, Association of Employment and Learning Providers chief executive Mark Dawe said: “After yesterday’s pre-pandemic figures showing an increase in the number of young people who are NEET, today’s data is extremely worrying for young people who were looking to start an apprenticeship or traineeship this year.

“The prime minister is absolutely right in saying that apprenticeships should play a ‘huge part in getting people back into the jobs market’ but the big problem is that Downing Street and the Department for Education are not singing from the same hymn-sheet.”

He added: “A large drop in apprenticeship opportunities for young people is already hitting a fragile infrastructure.

“The prime minister’s ambition for the importance of apprenticeships, which is shared by many commentators and the Labour Party, can only be realised if DfE ministers finally smell the coffee and become supporters of the sector through actions rather than words.”

A Department for Education spokesperson said: “While the impact of the coronavirus is still becoming clear, we are supporting employers, apprentices and training providers during this challenging time so people can continue to access high-quality apprenticeship opportunities.

“It is encouraging to see that even in these challenging circumstances, many employers still recognise the value apprenticeships can bring to their businesses.”

As reported by FE Week last month, the DfE is currently consulting on how to “repurpose” their monthly apprenticeship data releases in light of Covid-19.

The department said today that they “continue to seek your feedback on the type of breakdowns of most useduring this period, such as national apprenticeship starts by age, level and individual standard etc, so we can consider going forward and in light of data quality assessments”.