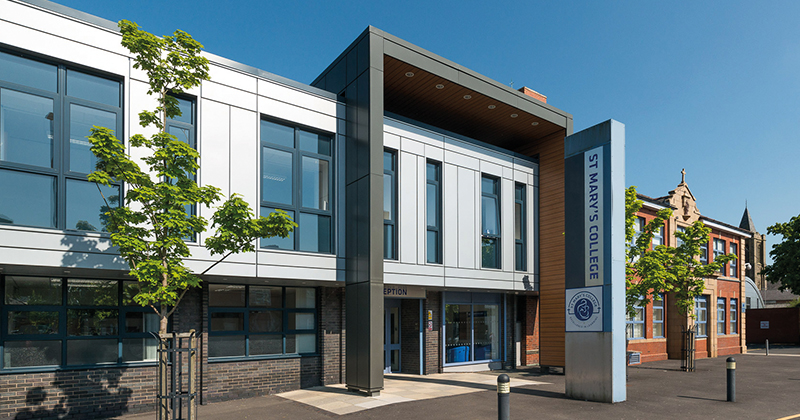 A sixth-form college in Blackburn is set to be the first of its kind to remove its Catholic status, FE Week understands.

St Mary’s College, now in government “supervised status”, will make the move in order to secure a merger partner to survive after running into severe financial difficulty.

Earlier this week, an FE Commissioner report about the college was published and concluded it could not continue as a standalone entity beyond the current year and “urgently requires” a restructure.

The main reason St Mary’s, which is the smallest sixth-form college (SFC) in England, was told it was no longer “sustainable” was due to falling student numbers.

It was first warned of its deteriorating financial position four years ago and was urged at that time to find a merger partner or to academise.

But it has been its ethos as a Catholic college that has prevented it from doing so.

The process for removing the status – including timescales – is not clear at this stage because it has never been done before.

St Mary’s said it could not comment on this because a structure and prospects appraisal is currently taking place with the FE Commissioner. It is due to finish by April and is expected to iron out the details for removing its Catholic status.

A spokesperson for the Diocese of Salford, the district within which St Mary’s falls, added they were “awaiting the outcome of that process”.

Despite being established by the Marist Fathers – an international Roman Catholic religious congregation – in 1925, the FE Commissioner’s report found St Mary’s current trustees were concerned the college “does not meet its constitutional objectives as a Catholic institution”, citing non-Catholic senior staff and very low numbers of Catholic students.

For example, vice principal Elissa Best was appointed interim principal in July 2019 but it was noted that she had not been eligible for the permanent post as she is not Catholic.

They also concluded that imposing mandatory Catholic requirements with significant financial implications would be “unfeasible”.

They have now proposed to “dissolve the trust through a ‘managed withdrawal’, removing the constraints on the college and allowing it to seek a non-Catholic partner as part of any restructuring process”.

The report added that while land and leasing arrangements are “complex, there is a willingness to negotiate a long-term agreement to the benefit of both the trust and college”.

St Mary’s was first told to merge or academise in 2016 following the Lancashire Area Review.

Becoming an academy, and consequently enjoying the luxury of not paying VAT, has been an option for nearly all SFCs since former chancellor George Osborne changed the rules in November 2015.

But a group of 14 Catholic-run SFCs have been prevented from doing so due to their religious character, areas of curriculum, acts of worship and governance, which would not be maintained under current government rules.

A short clause in the education bill could “easily rectify this”, according to the Catholic Education Service and the Sixth-Form Colleges Association, which were in joint talks with the Department for Education in 2018.

The SFCA this week said discussions are still ongoing but it would require a brand new education bill to add the clause.

The same issues persist when it comes to merging with other non-Catholic colleges.

Plans were previously developed to create a formal federation between Liverpool Hope University and Cheadle & Marple Sixth-Form College but this “did not address the financial weaknesses at St Mary’s directly”, this week’s report said.

In addition, a “weak” balance sheet was reported to provide “no resilience against unforeseen events and raises questions as to future solvency”.

In a letter published alongside the report, former DfE minister Lord Agnew said it was “clear that previous efforts to secure the college’s financial position since being placed in intervention have failed”.

“The college is currently operating under extreme financial duress and is unsustainable without immediate exploration of possible structural solutions,” he added.

The college declined to comment on potential merger partners.