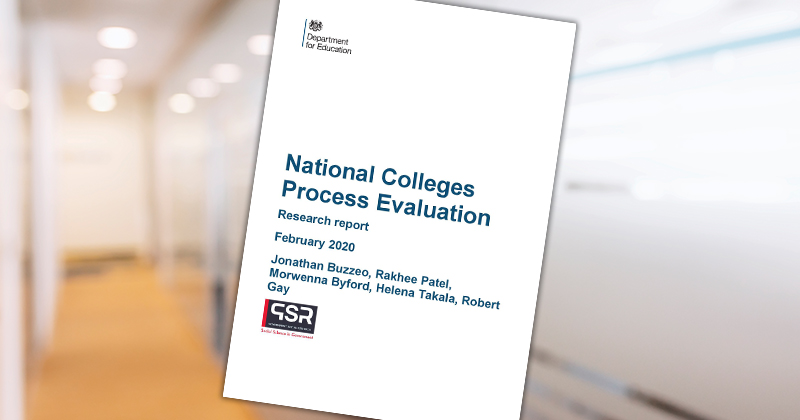 The government’s own researchers have slammed policy makers for exacerbating National Colleges failures, according to an evaluation report into how the same mistakes can be avoided with Institutes of Technology.

In the 107-page evaluation report published today, the Department for Education was criticised for setting up specialist National Colleges as stand-alone institutions that relied on working capital loans and employer investment to fund initial operating costs.

“An inherent risk with a specialist institution is that the scope is so narrow that learner numbers will be too low to achieve a broad base and achieve financial sustainability.”

The report goes on to say: “More detailed consideration could have been given to other models such as evolving new institutions from existing education and training providers” and “if more time had been invested early on to analyse the potential impact of existing policies and involve relevant stakeholders in finding solutions, it is likely there would have been fewer challenges.”

Only one of the four national colleges launched with £80 million of public money was developed at existing providers: National College for Nuclear (NCfN), and the report found it faced “fewer challenges” than the others as it is based across two hubs at Bridgwater and Taunton College in Somerset and Lakes College in Cumbria.

The two existing providers were able to provide a lot of the wider infrastructure required for setting up a new provider, like business development and marketing, and coverage for some of the college’s overhead costs, instead of the loans.

The report compares this favourably to the planned set-up of IoTs, which will be run by high-performing FE and HE providers.

Having been launched by the DfE two years ago, the report says National Colleges have also struggled with recruiting high-quality staff as they are “difficult to obtain in buoyant or specialist sectors of the UK economy where salary expectations are high”.

Senior members of the teaching faculty who had come over from industry reported they had taken pay cuts in order to work for their college, with one lecturer likening it to “national service”.

ESFA funding being paid in arrears after the first two years of delivery, the report reads, has created difficulties when the colleges try to recruit staff to design and deliver new courses and increase the scale of delivery.

Staff at some of the National Colleges suggested to the researchers that employer contributions could be sought to co-fund salaries for senior teaching positions in order to bring them closer in line with the industry average.

And they would have progressed more smoothly if a greater amount of time had been invested by the DfE in analysing the impact of policies like funding being paid in arrears, it has been found.

“More work could have been undertaken at the early design stage of the policy to understand adjustments required to existing processes to accommodate the new national colleges,” the report reads.

A fifth national college, specialising in onshore oil and gas, was put on hold by its overseers United Kingdom Onshore Oil and Gas (UKOOG) while “greater clarity and progress by way of timing and the scale of production activities is ascertained”.

The report also covers how learner numbers across all of the colleges have been below target because of “unforeseeable circumstances” from capital build projects and “slippage” in the delivery of national infrastructure projects affecting apprenticeship demand.

Such as was the case with NCHSR, where delays in announcing HS2 contractors meant employers were unable to commit to the apprentice volumes they had originally anticipated, and the National College for Onshore Oil and Gas, which the report says was paused “due to weak economic conditions in the sector”.

An Ofsted report into National College Creative Industries, released last November, found it had just 24 classroom learners and 81 apprentices being delivered provision inspectors rated as ‘requires improvement’. NCCI had previously predicted it could attract 450 learners in 2018/19.

This week, the college relaunched as NCCI Ltd, with South Essex College signed on to deliver what was the college’s classroom learning and Access Creative College running apprenticeships provision.

Department for Education representatives were attributed in the report as saying the narrow definition of colleges as highly specialist institutions has further impeded them from meeting their learner number targets.

And even the viability of the colleges’ original learner numbers has been called into question by stakeholders, the report reads, as the colleges had predicted growth during the first five years of operations which was without precedent in the FE sector.

Only NCfN has met its learner number targets for the 2018/19 academic year and Ada has come close; but NCCI and NCHSR both fell short.

The report does say, given the various challenges the colleges have faced, it is impossible to assess if these targets could have been achieved in different circumstances.

It concludes: “Across all National Colleges, learner numbers are lower than initially forecast in their original business plans and the colleges are not yet national in their scope.”

A Department for Education spokesperson said: “As with any start-up organisation, the colleges have faced challenges which has impacted on delivery in their initial set up phase.

“However, we will continue to work with them while they establish themselves and work towards financial stability.”