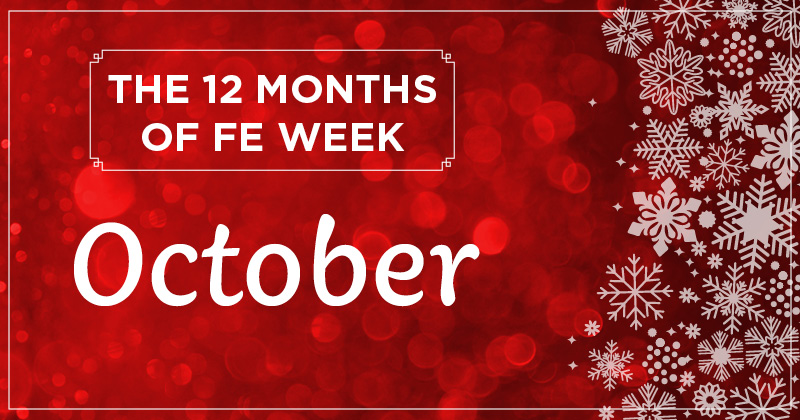 For the last 12 days of 2019 we’re running back through the previous 12 months of FE Week. Today we take a look at October…

Colleges received a welcome boost when analysis revealed 78 per cent of them had received the top two Ofsted grades – ‘outstanding’ or ‘good’ – a record high proportion since comparable records began in 2015.

After being shown FE Week’s analysis, Gavin Williamson described FE as a “vital” part of the education system and expressed his thanks to all lecturers, leaders and support staff for their hard work.

The education secretary also defended his old sixth form, Scarborough Sixth Form College, after it dropped out of offering digital T-levels, as he pledged to convene business leaders in an attempt to address shortages of work placement opportunities.

One week later it was announced that NCFE and City & Guilds had won contracts to deliver the second wave of T-levels.

The Association of Employment and Learning Providers also held its autumn conference this month, where chief executive Mark Dawe alleged that sex discrimination may lay behind decisions on funding rates.

Thousands of students, staff and people who love colleges across the country then signed pledge cards and handed them to their local MP to mark this year’s Colleges Week.

Hannah H from National Cyber Security Centre told us why it is vital that everyone in the FE sector understands their own role in protecting their networks, following a string of cyber hacks.

She provided five measures colleges could take to make any attack less likely to succeed in the first place and, if they are affected, to reduce its impact.

FE Week also continued its revelations about Hull College Group. The investigation of the college surviving on bailout funding was understood to include more than £100,000 spent on a computer game app, computer game-style cinema advertising and a PR agency that promoted a music event and computer game.

The spending on hiring an orchestra was described as “concerning” by the college’s local MP, Emma Hardy, a member of the education select committee.

Meanwhile, the government announced plans for a radical overhaul of its subcontracting rules amid high-profile cases of “deliberate” fraud, and a former adviser to the minister for higher education expressed “concern” that dozens of providers delivering level 6 and 7 apprenticeships are still going without inspection, more than four years after the courses began.

We also sat down with Charlotte Bosworth, the managing director of Innovate Awarding, who told Jess Staufenberg that she is quite happy to be known as the “end-point assessment woman”.

Staufenberg then set out what Lord Agnew’s appointment as a minister for FE might mean for the sector, having closely followed his career in the schools sector, where his reputation divides opinion.