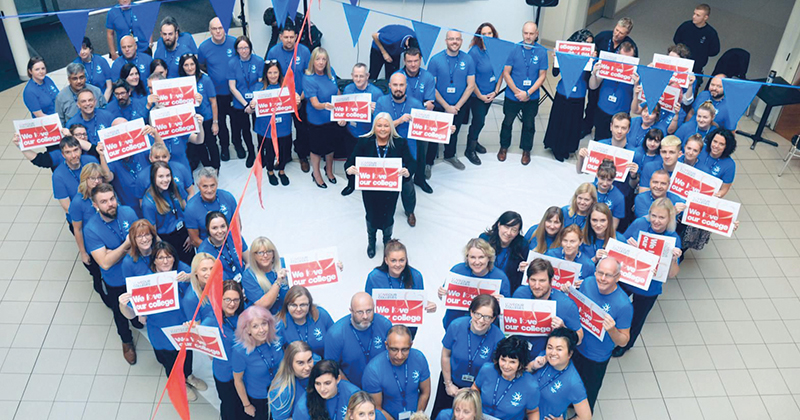 Thousands of students, staff and people who love colleges across the country signed pledge cards and handed them to their local MP to mark this year’s Colleges Week.

Members of Parliament were asked to commit to writing to the chancellor to ask him to include a long-term funding plan for colleges in the next comprehensive spending review, ask a question in the Commons about FE funding, and to go and “see the life changing work that colleges do every day”.

Now in its second year and organised by the Association of Colleges, the week of activity is part of the Love Our Colleges campaign. It is used to demonstrate why investment in the sector must be sustainable.

A march on parliament was the centre-piece of the inaugural campaign in 2018 and appeared to make a difference after the Treasury announced a £400 million funding boost in August.

Social media was where support for the campaign was most visible this year, with multiple ministers expressing their support, and colleges sharing their achievements.

On Monday, the Department for Education tweeted a video of education secretary Gavin Williamson from his visit to Exeter College the week before.

“It’s really important that we celebrate everything that’s done in our colleges,” he said.

“Not just about what the students are doing there, but of course also the teachers and the lecturers and all those who make our colleges such an amazing success.”

Many Twitter users responded to a call out to #makeasongFE.

Rhian Short, marketing and communications manager at the Learning and Work Institute, started the trend off with ‘Oh what a night school’.

Other suggestions included the reimaging of Robyn’s ‘Dancing on my (adult learning) loan,’ Stevie Wonder classic ‘Isn’t FE Lovely’ and the Spice Girls’ ‘2 Become 1’ being proposed in reference to area reviews.

Trade union UNISON also joined in the fun with an adaptation of Rage Against the Machine’s Christmas number one ‘Skilling In The Name Of.’

AoC chief executive David Hughes said: “Colleges Week 2019 has been another great example of colleges proudly showing the impact they have on our society.

“I’m really pleased with how the week has gone – following the hashtag alone has introduced me to hundreds of student stories, staff passionately describing the work they do, events with employers and students signing pledge cards.

“The key message behind the week is that colleges are vital to every community, to millions of people, to communities and to the labour market.

They need to be supported and invested in, and now that we have raised the profile I am sure that will happen.”