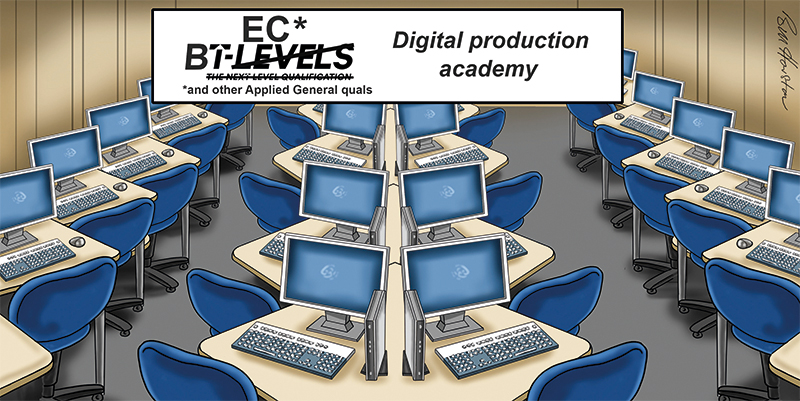 Colleges will have to keep on running T-levels for at least 20 years if they want to avoid handing back millions in capital funding.

A pot of £38 million has been made available to colleges and schools to help build new classrooms and refurbish buildings in readiness for the introduction of the new technical qualifications next year.

The Department for Education this week confirmed to FE Week that providers who win the funding risk having to hand it back if they stop offering T-levels within the next two decades.

“The terms of grant will require providers to use the premises funded for supporting the T-level curriculum for 20 years,” a spokesperson said.

“If a provider withdraws from T-level delivery, we reserve a right to recover any capital grant we have paid.”

Sixth Form Colleges Association chief executive Bill Watkin called this “a significant commitment” which sends out a clear message: investing in T-levels is a long-term strategy.

He said the capital grants are helping providers invest in dedicated teaching spaces and industry-standards kit which “will make a huge difference to schools and colleges’ ability to hit the ground running from September 2020”.

But, Watkin added, colleges will always be reviewing their curriculum to reflect student voices, shifting population profiles and a changing local economy: “Who knew, 20 years ago, that the Ebacc would be shaping student choices today, or that maths would be the most popular A-level, or that criminology would be booming?”

Deputy chief executive at the Association of Colleges Julian Gravatt said the clause was a “backstop” and his organisation was “confident T-levels are here to stay”.

But he added: “T-levels will only be suitable for a minority of college students so the DfE needs to get a move on and sort out its capital funding plans for the facilities used by the majority; the Post-18 review panel recommended a £1 billion three-year programme.”

Eleven colleges have been awarded a slice of the £38 million capital funding pot to date, with grade one Barnsley College the prime beneficiary so far, receiving £2.2 million.

There have been a number of changes with regard to which providers will be delivering the flagship new qualifications as the sector hurtles towards roll-out: it was announced this month Scarborough Sixth Form College was pulling out of offering the digital qualification in 2020.

At the time, Gavin Williamson, the secretary of state for education, welcomed the decision, which Scarborough cited as being “due to our geographical location, it is proving difficult to secure sufficient work placements”.

Furthermore, Big Creative Training and the London Design and Engineering UTC were removed from provision in February because T-levels “did not fit with the specialist nature” of the former and the UTC received a grade three from Ofsted.

Providers must have either a grade one or two from Ofsted, and ‘satisfactory’ financial health to deliver T-levels.

A school was removed from the programme for receiving an Ofsted grade three, while two others pulled out, in October.

But at the same time, Suffolk New College was added to the list of providers from 2020.

“We always expected there to be a certain amount of fluctuation of providers, and the pathways they offer, as we progress towards September 2020,” a DfE spokesperson said when Scarborough withdrew.