Colleges and sixth forms will need an extra £1.1 billion on top of the government’s recently announced spending boost to fully reverse cuts since 2010, new research has found.

This increases to £1.4 billion to “ensure that spending on T-levels is additional to an unchanged level of spending per student”, according to the Institute for Fiscal Studies’ annual report on education spending in England.

Report co-author Luke Sibieta said chancellor Sajid Javid’s vaunted spending boost of £300 million (in 2019-20 prices) amounted to a “small rise” against the backdrop of cuts since 2010-11. 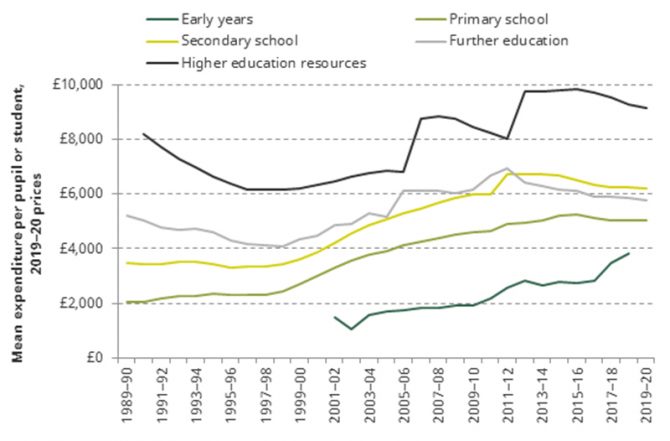 Spending per student per year at different education stages (IFS)

The £1.1 billion that would be needed to reverse the cuts would include £320 million for 16–18 colleges and £730 million for school sixth forms.

The boost, meanwhile, will only lead to a real-terms per-learner increase of four per cent in 2020-21; seven per cent below the 2010-11 level for colleges, and 20 per cent for sixth forms.

Deputy chief executive of the Sixth Form Colleges Association James Kewin said the IFS findings highlight the “huge reductions in 16 to 18 funding that we have had to contend with since 2010”.

“But rolling back the funding cuts imposed since 2010 is the wrong target. The key issue to focus on is what level of funding is required to deliver a high-quality sixth form education now, and in the future?

“It is also important to shift the focus from T-levels onto the vast majority of 16 to 18-year-olds that pursue, and will continue to pursue, a non-technical course.”

Chief executive of the Association of Colleges David Hughes said the report shows “the reality of a decade of cuts to colleges”.

And while the chancellor’s spending announcement was “welcome”, “it must be followed by long-term investment to reverse ten years of continuous cuts and reform”.

Policy director of adult education network HOLEX Sue Pember said the report “demonstrates adult education is under-resourced and the lack of government funding has led to a sharp decline in adult student numbers.

“HOLEX trusts the Treasury and DfE will now listen, take note and do something about it in the next spending review round.”

The IFS has also found over 60 per cent of apprenticeships are at A-level equivalent or higher, and FE Week has previously reported starts on higher-level courses, such as the level 6 chartered manager programme, have shot up since the levy was introduced and are soaking up available funds, leaving little for non-levy payers.

The CBI called on the government this week for a £100 million yearly top up to the levy to stop it becoming a “roadblock to the government’s wider and welcome efforts to modernise the skills system”.

A Department for Education spokesperson said: “We recently announced a £14 billion investment in schools – the biggest cash boost for a decade.

“Alongside this, we announced a significant real terms increase in funding for 16 to 19 year olds in 2020-21 to make sure we can continue to develop world class education to rival countries on the continent. We also provided £700 million extra for children with Special Educational Needs and Disabilities.

“Together this package will give all young people the same opportunities to succeed and access the education that’s right for them regardless of where they grow up. The Prime Minister is clear that education is one of his main priorities, and we want a system that boosts productivity, improves social mobility and equips children and adults with the skills and knowledge they need to succeed.”