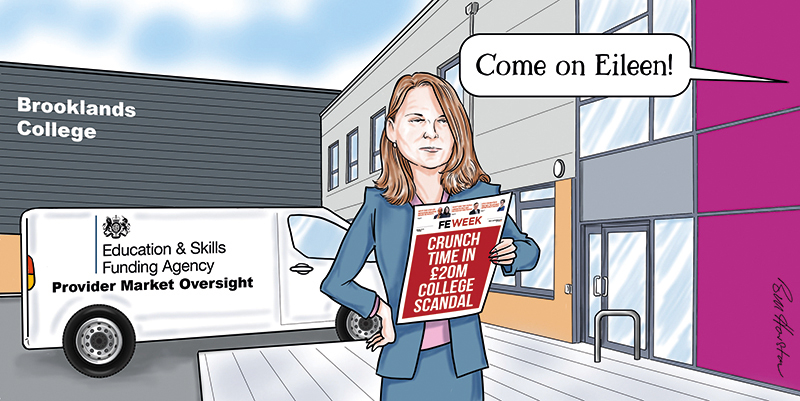 A college’s future is in doubt after officials demanded it pays up to £20 million back to the government following investigations into a major subcontracting scandal, FE Week can reveal.

Brooklands College has been told to pay the funding clawback owing to its dealings with mysterious training firm SCL Security Ltd, owned by Andrew Merritt.

The pair have been involved in multi-million pound subcontracting deals for years whereby SCL Security supposedly trained hundreds of apprentices, mostly aged 16 to 18.

Questions began to mount over the arrangement when, in November 2018, FE Week discovered the subcontractor employed fewer than 10 staff and no evidence could be found that the courses were advertised, who the apprentices at SCL Security were, or where it trained them.

Merritt and the college repeatedly refused to share this information despite numerous requests from this newspaper.

Once the Education and Skills Funding Agency’s boss Eileen Milner became aware she launched one of the agency’s biggest ever investigations, hiring three different audit firms to conduct simultaneous inquiries of different organisations involved in the subcontracting arrangement.

Apprenticeship starts were suspended at SCL Security while inquiries were made.

FE Week can now reveal that amongst many findings, the ESFA investigation discovered that the apprenticeship funding was being used to pay the wages for the 16 to 18-year-olds, which is very clearly not permitted in the agency’s funding rules.

It is understood that a recruitment agency called Workforce Staffing Ltd, part of Workforce Solutions Group Limited which is headed up by two brothers – Paul and Joe Alekna – who were at the centre of an FE Week exposé in 2016, were involved in this.

As a result, the auditors view up to £20 million of ESFA funding to be at risk.

Brooklands College said it was unable to comment on “confidential details” about the ongoing ESFA investigations.

“We continue to work closely with the ESFA Territorial team and have an excellent working relationship,” a spokesperson added.

The ESFA declined to comment. Merritt and the Aleknas failed to respond to numerous requests for comment.

Gail Walker, who worked her way up to principal of Brooklands after joining in 2011, resigned from the college in March 2019 following the launch of the ESFA’s investigation.

The college claimed at the time that this was “part of her long term personal plan”.

The chair of Brooklands used to be Jerry Tapp, who stood down as planned in September 2018, two months before FE Week first reported on the subcontracting arrangement with SCL Security.

The new chair is Terry Lazenby, who had been vice chair since 2014 and was a member of three committees including audit.

The college had £3.4 million in cash (down from £4.6 million the year before), a £3.4 million long-term bank loan and £25 million in fixed assets in the buildings and land.

A clawback of £20 million could therefore put the college at risk of insolvency, something the college has declined to comment on.

The education watchdog exposed ‘insufficient’ apprenticeship delivery at the provider in February which excluded employers and lacked scrutiny.

SCL Security has worked with other prime providers in the past.

Catch 22 were one such prime provider. A spokesperson told FE Week they were audited earlier this year following the ESFA’s investigation into SCL Security, but “we’ve have had no further information requests since”.

Ealing, Hammersmith and West London College also subcontracted to SCL Security, with deal worth £1.7 million in 2018/19, which covered basic English, maths and IT skills for learners whose first language is usually not English.

At the time, EHWLC’s principal, Karen Redhead, said: “I understand from speaking with the ESFA that the issue was with regard to apprenticeships and contracts of employment. We do not subcontract to SCL Security Ltd on apprenticeships.”

She declined to comment this week on whether her college has since been audited by the ESFA.

Whilst the ESFA has investigated and taken action against Brooklands, it is unclear, at this time, if any action has been taken against SCL Security.