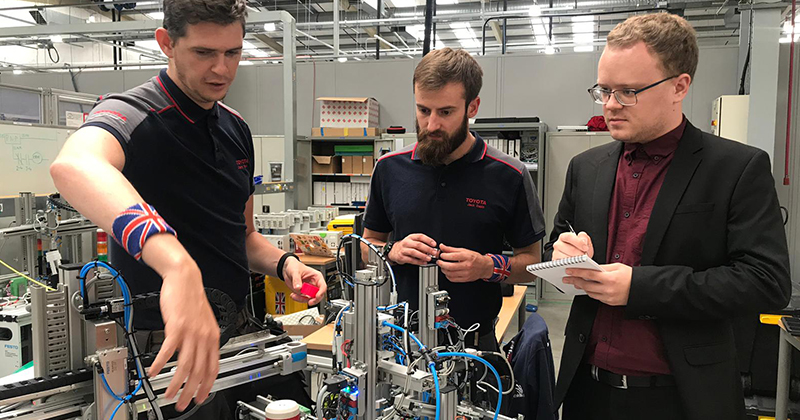 Reporter Fraser Whieldon travelled to Toyota UK in Derby yesterday to meet the mechatronics duo; both of whom are 24, from Derby, and work at the automotive manufacturer.

The two are no strangers to international competitions, having won a bronze medal for the UK at EuroSkills 2018 in Budapest. What are their hopes of bringing back a silver or gold from WorldSkills next week?

Our aim is to be the highest-ranked European team

“Realistically, there is a lot more competition going from EuroSkills to WorldSkills,” Jack (pictured centre) said. “I think we’ll take it task by task and as long as we come out the other end knowing we have given it our all, we’ll be happy.”

Danny (pictured left) is less coy, saying: “Our aim is to be the highest-ranked European team.”

Their competition will consist of constructing four stations over four days, much of which will be blind tests.

The stations will form a production line which draws on the multiple disciplines of mechatronics, including mechanics, electronics and fluid processes.

For example, a station they had been practising with at Toyota’s on-site academy involved transporting a WorldSkills coin in a pot from one end of the station to another using circuits to power the components and pressurised air to lift the pot around the production line.

“They could throw in new equipment nobody’s seen just to enhance the competition.”

But that’s good for the competition, says Jack, as “everyone’s on the same level, but you’ve never seen it before, so it’s about overcoming those problems”.

Making the playing field more level could play in Danny and Jack’s favour when they are up against some countries like China and Russia, which plough tremendous amounts of time and resources into WorldSkills and compete in a much wider array of events.

While Jack says they are “very lucky” that Toyota invest so much in the competition, going up against countries which prepare so rigidly for this one tournament may prove to be an epic challenge for the pair.

To prepare, the two have been revising the components they know will come up, to hammer down how they will function in the production line.

Another area is speed, trying to perform quicker and more efficiently.

Much like Phoebe MacLavy, Team UK’s hairdressing competitor FE Week spoke to last week, these two have been honing their skills and scouting out the competition at a number of other tournaments. 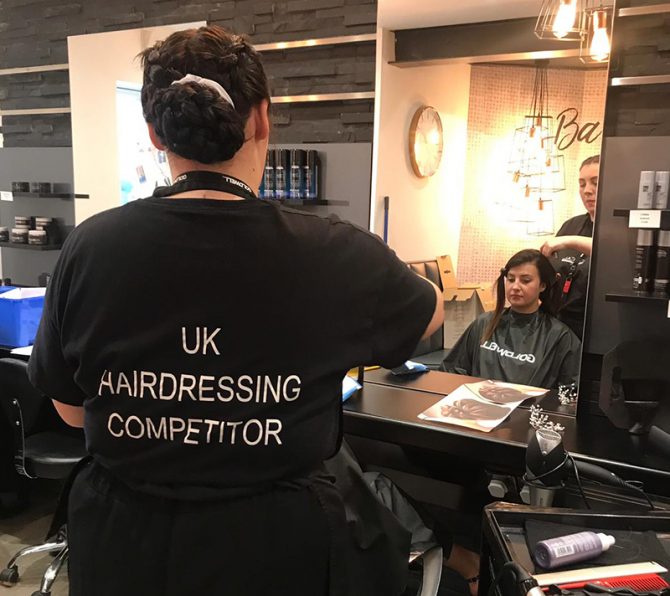 Other than EuroSkills, Jack and Danny, who completed apprenticeships together at Toyota, have done other competitions in the Netherlands, the UK, and Budapest last week, where they competed against Russia and Hungary – the two teams which bested the UK at EuroSkills – and came second behind Russia.

Danny said: “As we’re working as a pair, we are trying to know each other’s strengths and what we can leave to the other person to save time.”

Helping them along is training manager Calum Knot, who competed in mechatronics at EuroSkills 2014.

There is hardly a better pair of hands for Jack and Danny as, aside from having finished in the top five in 2014, Calum has also worked as an associate lecturer at Middlesex University and goes around the country running training and installing equipment for international technical education company Festo Didactic.

“One of the things about being a training manager is you don’t have to be the quickest person at doing it,” he said.

As with other training managers, Calum will stop being a training manager in Kazan and become an expert who must remain neutral and not show favouritism towards their national team.

Of his expert role, Calum said it is very hard to stay “emotionally disconnected” and avoid looking over at what your competitors are doing.

Hopefully he will not have much to worry about, as Jack says: “We are as ready as we can be.”

Team UK will travel to Russia on Monday before four days of intense competition start on 22 August.