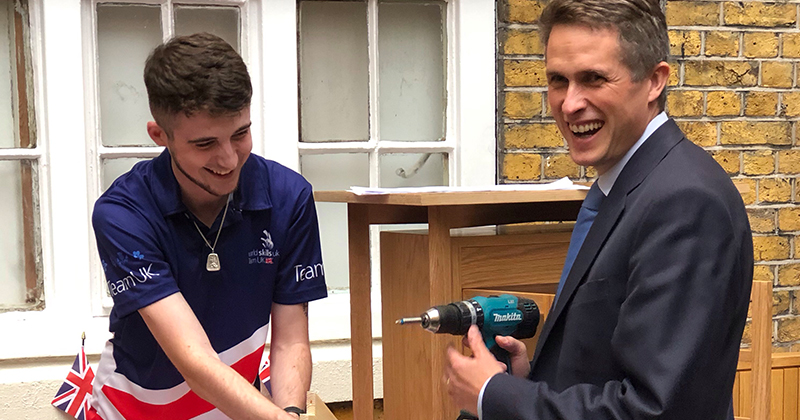 The education secretary, Gavin Williamson, has met Team UK representatives during his first visit to a further education college in his new role.

On what the Department for Education described as a unofficial private visit, Westminster Kingsway College hosted a meeting between Williamson and representatives of WorldSkills UK, including chief executive Dr Neil Bentley-Gockmann.

His visit coincided with Vocational Results Day, when learners sitting qualifications such as BTECs receive their externally assessed results.

The Education Secretary @educationgovuk @GavinWilliamson has been meeting members of the @worldskillsuk team at our Victoria campus today, trying out his #skills and wishing the team good luck for World Skills 2019 in Kazan. Thank you for coming and we hope to see you again soon. pic.twitter.com/HI5Bjigaup

While he was there, Williamson also got the chance to try his hand at some of the skills himself including hospitality cocktail making and carpentry.

37 competitors representing the #UnitedKingdom will show how brilliant our technical education is next week at @WorldSkillsKZN. So enjoyed hearing about the training all the apprentices and students have undertaken and I am sure all their incredibly hard work will pay off. https://t.co/4fH6Q3omvq

“It was fantastic to meet members of Team UK and see them all in action,” Williamson said.

“There is no greater honour than representing your country on a global platform like this, and I wish them all the very best of luck as they head out to Kazan next week.”

Williamson, who has taken on personal responsbility for the FE and skills brief, also told all those receiving vocational results that today is the “culmination of years of hard work for thousands of young people”.

“It is right that their efforts are celebrated across the country as well as on the front pages – but getting a good set of A levels and then a degree is only half the story.

“As the first education secretary to personally take charge of further education and skills, I’m going to make sure that those people who opt to take a technical or vocational qualification are given the proper recognition for their hard work.”

He added that while some people will be getting their technical and vocational results today, from next year, students finishing their GCSEs will be able to take “one of our new T-levels as a high-quality technical course that will carry the same UCAS points equivalent to three of our world-class A levels”.

“Young people and their parents can be confident that T-levels will be just as stretching as their academic equivalents and will offer progression to the next level whether that is landing a great job, an apprenticeship or going on to do a degree,” he said.

“As the technical ‘gold standard’ option for young people post-16, T-level results will be also be published on the same day as A-levels from 2022.”

“Technical and vocational educational has played second fiddle to traditional academic options for too long.

“In three years’ time the look and feel of results day will be very different, with students getting their T-level results celebrating their hard work alongside those getting their A-levels.”

This year’s Vocational Results Day comes as the future of thousands of applied general qualifications, including BTECs, hangs in the balance. A government review of those at level 3 and below was launched earlier this, and any that are deemed to overlap with A-levels and T-levels will have their funding removed.

Team UK will travel to Russia on Monday before four days of intense competition start on 23 August, where they’ll battle it out with 65 other nations in a range of disciplines, from mechatronics to cooking.