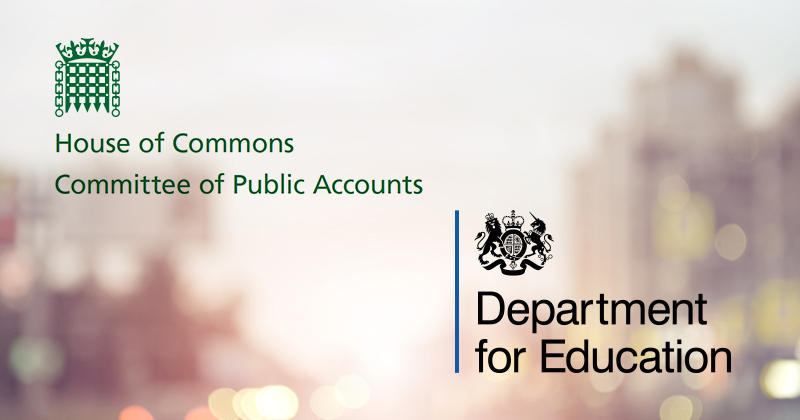 The Public Accounts Committee has today published its progress report into the apprenticeship reforms that were introduced in April 2017.

Members of the committee grilled a number high-profile government officials on the affordability of the programme in March following a National Audit Office report earlier that month that warned it is not financially sustainable.

The PAC’s final report dissects the evidence given, offers its view on how the apprenticeship reforms are going, and gives six recommendations for the DfE and Institute for Apprenticeships to act upon.

The PAC said the way the programme is evolving risks leaving behind people with lower skills and those from disadvantaged communities.

The report added that the proportion of apprenticeship starts among people from disadvantaged areas has fallen, partly because of the growth in starts at level 3 and above.

The PAC wants the department to assess whether there are enough level 2 standards to “allow school leavers or those with fewer skills to easily access apprenticeships”, and report back within six months.

The DfE’s approach to widening participation among under-represented groups has been “inadequate”, according to the PAC.

Despite this being one of the apprenticeship programme’s four main objectives, the committee believes the targets for apprenticeship starts among the black, Asian and minority ethnic population, and among those with a learning difficulty, disability or health problem, are “unambitious in that they are below the respective levels of these groups in the working-age population”.

Additionally, there are no gender-based targets for the programme despite the fact that only 9 per cent of people taking STEM subjects are women, a position that the DfE’s permanent secretary Jonathan Slater has admitted is “hopeless”.

The PAC wants bigger targets for 2021 and beyond, as well as an evaluation of the impact of the DfE’s efforts to attract more women into STEM apprenticeships.

It added that the “poor quality” of some providers contributes to a situation where over 30 per cent of apprentices fail to complete their apprenticeship successfully each year. In 2016/17, this equated to more than 132,000 apprentices.

And since 2014/15, a growing proportion of training providers have fallen below minimum standards for their apprenticeship achievement rates.

The PAC points out that the ESFA may issue these providers with additional conditions of funding or extra contractual obligations. Ultimately it can terminate providers’ contracts, but this is “extremely rare” — it has taken this step with only 11 providers in the past five years, according to the PAC.

The PAC said the apprenticeships programme is not supporting smaller employers “well enough”.

It explained that while levy-paying employers have direct access to their funds via an online system, to pay for apprenticeship training and assessment, smaller employers currently access apprenticeships via training providers who are funded through contracts with the ESFA.

The DfE expects all small employers to be on the online apprenticeships system with levy-payers next year to access training funds directly.

But until then and under the current arrangements, if levy-payers spend “more than around half of their funds, the ESFA will have less money available to fund apprenticeships among smaller employers” and while levy-payers have spent a “relatively small proportion of their funds so far, training providers are already reporting that they do not have enough funding to offer as many apprenticeships to smaller employers as they would like”.

The PAC wants the DfE to consider “protecting” funding for non-levy-paying employers.

The PAC said they do not have “confidence” in the arrangements for assessing apprentices.

Under the standards, each apprentice is assessed by an independent third-party at the end of their apprenticeship. However, in late 2018, 19 standards had no end-point assessment organisation in place, and 98 standards had only one assessment organisation. In addition, the arrangements for checking the quality of end-point assessments are “muddled, and it is unclear whether the numerous bodies involved provide a consistent level of assurance”.

The committee wants the ESFA and Institute for Apprenticeships to write to them within six months to “provide more detail about the coverage and capacity of end-point assessment organisations” and “set out what they will do to streamline and strengthen quality assurance arrangements in order to give greater confidence that end-point assessments are robust, fair and consistent”.

The department uses a ‘skills index’ as a proxy measure for the impact of apprenticeships on productivity, which takes account of the number of apprenticeship starts, apprentices’ progression into jobs, and the subsequent increase in their earnings.

However, the PAC said the DfE has not set out what improvement in the headline value of the index would constitute success.

It recommends that the department should “publish the level of improvement in the skills index that it is aiming to achieve in the short and long term”.