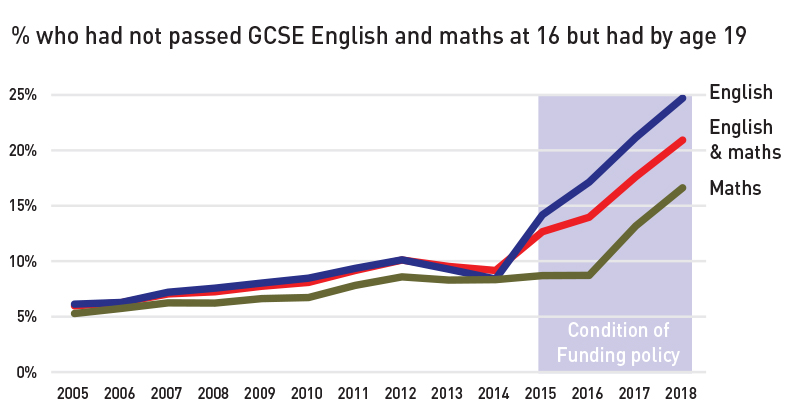 The policy requiring students to continue studying English and maths if they fail the subjects at GCSEs at age 16 continues to bear fruit, as revealed in FE Week’s analysis of the government’s latest attainment figures.

The controversial “condition of funding” policy, introduced in 2014, means that colleges must help students who narrowly failed to achieve a pass (grade C/4 or above) to retake their GCSEs, or else risk losing funding.

Despite criticism of the rule, with providers reporting demoralised students being forced to take multiple resits and wanting to deliver the alternative functional skills qualification, the proportion and number of students achieving both GCSEs after age 16 has more than doubled, from 9 per cent (21,721) in 2014 to 21 per cent (46,886) in 2018.

Stephen Evans, chief executive at the Learning and Work Institute, said the figures prove “the policy focus has clearly helped reinforce and accelerate the trend of improvement”.

Writing in FE Week, he said: “The fact more young people are getting the English and maths qualifications they need shows the policy is making a positive difference.

But that doesn’t mean the current policy is perfect. “There are still too many young people on a Groundhog Day of multiple GCSE retakes, risking putting them off learning altogether.”

Reacting to our analysis, skills minister Anne Milton said: “We are delighted to see the sharp increases in 19-year-olds who have achieved passes in these subjects at GCSE or equivalent, which is in part down to our reforms.”

In 2016, Ofsted’s then boss Sir Michael Wilshaw said the condition of funding rule was “failing”.

“While the policy’s intention to improve literacy and numeracy levels is well intentioned, the implementation of the policy is not having the desired impact in practice,” he wrote at the time.

And the current chief inspector,Amanda Spielman, said last December in her 2018 annual report:  “We continue to be worried about the effectiveness of the government’s policy…resit pass rates are low, at 24 per cent for English and

19 per cent for mathematics, and the impact of repeated ‘failure’ on students should not be underestimated.”

Sector leaders have called for the policy to be scrapped, and shadow education secretary Angela Rayner told the Association of Colleges last November that a Labour government would adhere to their demands.

But Milton told FE Week it was a “very disappointing and a backwards step from the Labour Party to say they would stop these resits”.

“We know that students who leave education with a strong grasp of English and maths increase their chances of securing a job, a career or going on to higher levels of education,” she added.

Gordon Marsden, shadow skills minister, hit back at the claim that a Labour government would scrap resits saying this is “simply not true”, but rather that they would stop resits being a funding requirement.

“We are committed to removing the condition of funding that is currently linked to the GCSE resit, to allow providers and teachers to work with students to find the most appropriate route to gaining the qualifications they need,” he said.

“This includes functional skills, which are more useful and relevant for a significant number of them, which this government has consistently failed to support.”

He added that a rise in young people “getting these vital qualifications is welcome but the current system is still failing them, with four out of every five unable to achieve their qualifications by the age of 19”.

Government has “no cause to be complacent, as the department’s own data shows that the vast majority of young people resitting under the current regime are not getting these qualifications,” Marsden said.

David Corke, director of education and skills policy at the AoC, said: “We recognise the hard work of college staff and celebrate the success of those students who achieve their GCSEs in English and maths by 19. English and maths are key life skills and essential to student progression and employment.

“However, overall achievement for GCSE resits is poor because GCSEs are not appropriate for all students. As proposed with T-levels, compulsory English and maths resits should be funded over and above the current study programme hours and the grade 3 condition relaxed to allow for either GCSE or functional skills.” 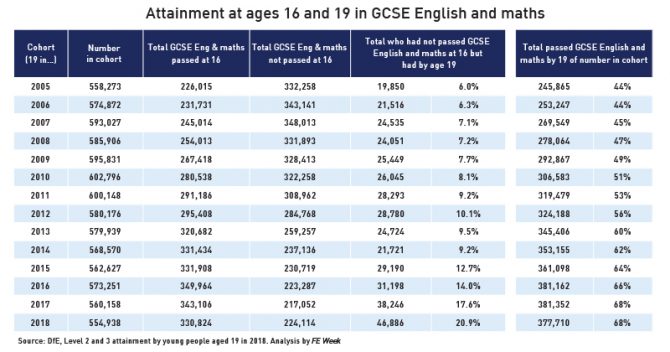