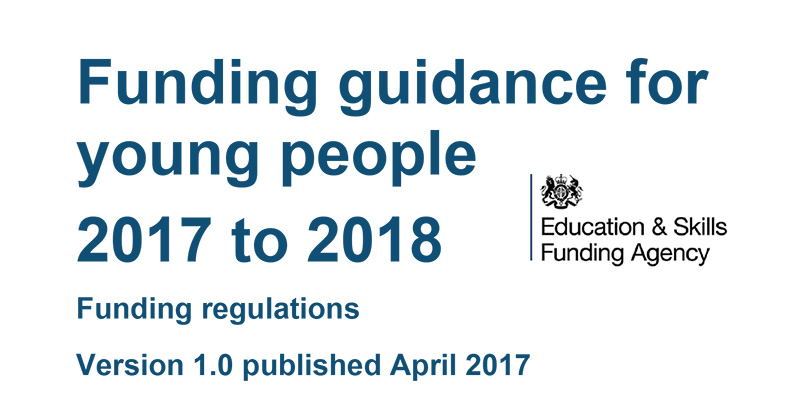 All 16 to 18-year-old students with a near-pass (previously grade D, now grade three) GCSE in the subjects have since August 2015 had to continue studying and resit them through the rule, alongside FE courses, rather than a level two functional skills qualification.

The policy came in for stern criticism in Ofsted’s annual report, published last December – as providers continued struggling with the extra burden of teaching the GCSEs to often demoralised students, and pass rates tumbled.

FE Week had been told by multiple senior sources that the policy was going to be scrapped – which would allow all such students to study functional skills. Confirmation of this was expected in funding guidance for 2017/18.

But the document, now published online by the new Education and Skills Funding Agency, appears to show no change, with the key section stating: “Full time students starting their study programme who have a grade three or D GCSE, or equivalent qualification in maths and/or English, must be enrolled on a GCSE, rather than an approved stepping stone qualification” After learning of this, Association of Employment and Learning Providers’ director of research and development, Paul Warner, told FE Week: “We’re extremely disappointed. A functional skill level two is equally indicative of ability as a GCSE grade C/four.

“If the government is serious about enabling young people to actually get on top of these core subjects, it needs to recognise they learn in different ways.”

Catherine Sezen, senior policy manager for 14-19 and curriculum at the Association of Colleges, added: “AoC had hoped to see the funding tolerance continued and will be speaking to Department for Education officials to discuss future steps.”

She added AoC stressed, in its recent response to the government’s Industrial Strategy consultation, that “the funding condition in its current form is not the best way to achieve our shared goal of ensuring every young person has necessary grounding in English and maths”.

Ofsted, which declined to comment today, was highly critical of forced resits in its annual report.

It said: “While the policy’s intention to improve literacy and numeracy levels is well intentioned, the implementation is not having the desired impact in practice. “For many students, an alternative level two qualification may be a more appropriate means of improving their English and mathematics and ensuring that they are ready for work.”

Meanwhie, Stephen Evans, chief executive at Learning and Work Institute, told FE Week: “Nobody disagrees that all young people should meet a standard in English and maths which gives them the best chance at further learning and a good job. That is the ultimate test of any policy. GCSEs are a widely recognised and understood qualification. But retake after retake is not the answer.”

Resit results for maths and English took a distinct turn for the worst last summer.

Ms Greening said: “Under the new system, a grade four and above will be equivalent to a C and above”. She added: “This is – and will remain – the level pupils must achieve not to be required to continue studying English and maths post 16.” She previously strongly hinted, at November’s AoC conference, that a change of heart towards resits was imminent.

As reported in FE Week, she told delegates students must not be spending “time running upwards against a brick wall that they’re not going to get over.”

Apprenticeships and skills minister Robert Halfon also told delegates: “It is clear that we need a credible, high-quality option for students for whom GCSEs are not appropriate or achievable.”