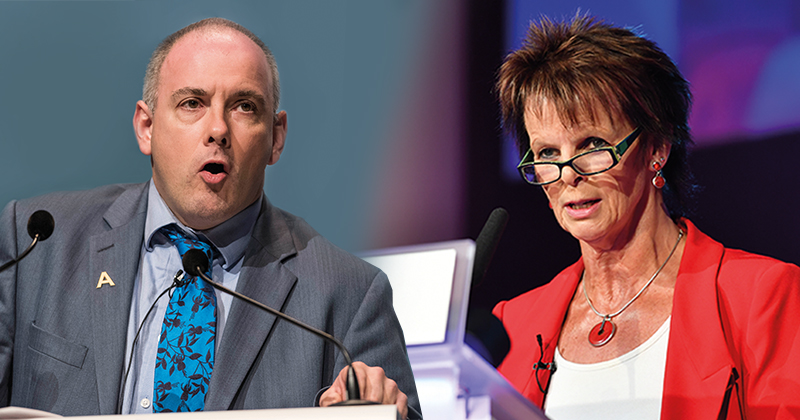 The skills minister and the chair of the education select committee were at loggerheads this morning after Anne Milton refused to say how much extra FE funding she is requesting from the Treasury.

Committee chair Robert Halfon argued that education ministers would be more likely to win over the Treasury if they were openly campaigning for an amount of extra funding or percentage increase.

He also likened the discussions between the Department for Education and the Treasury to cardinals secretly deciding on the next pope, and waiting for “white smoke coming through the roof,” rather than discussing it in public.

This was after, in answer to a question about the department’s priorities for the upcoming Treasury spending review, the schools minister Nick Gibb told a committee hearing this morning he was “concerned” about post-16 funding as it had not been “protected” like the schools budget.

Asked by Halfon how much extra funding the DfE wanted for FE, Milton said she would like to see the base rate rise, as FE providers are “risk-averse and concerned about balancing their books”.

Pressed by the committee chair for a figure, Milton said she “would not like to say off the top of the head” and it would be “inappropriate” for her to say.

Halfon hit back: “You have acknowledged there needs to be more funding and there are extra costs.

“You two say there needs to be more money, but will not make the argument publicly.

Milton said she objected to the fact she has not made this case publicly, but: “It is above our pay grade to say exactly what that figure is. That’s for the Secretary of State.”

“Do not doubt,” the minister continued, “that we don’t think we would like more money.”

“Just asking for more money is not enough”, she added.

However, the chair said she was before the committee to give them a figure on how much extra funding they would like for FE.

He argued the DfE ought to follow the lead of the Health Secretary and NHS England, which both argued constantly and publicly for a specified amount of extra funding for the NHS, and the government eventually published the NHS five-year plan last year.

The plan includes an average 3.4 per cent a year real-terms increase in funding over the next five years.

Milton replied she had instead added another tool to the committee’s box, with which they could fight for greater funding, by raising the socio-economic cost of not getting education right.

But she did not know how much account the Treasury makes of the socio-economic cost to the government of not getting education right; in terms of if they cannot get the education of high-needs children right and support their families, parents will not be able to work and the family will break-up.

A number of FE organisations have pushed Chancellor Philip Hammond to increase the amount of money allocated for each student in the upcoming spending review.

The Raise the Rate campaign, led by the Sixth Form Colleges Association, has called for the base rate for 16 to 18-year-olds to be upped from £4,000 to at least £4,760 per student per year, and then in line with inflation each year after.

In February, the Association of Colleges, which backs the Raise the Rate campaign, increased this call to £5,000 per student after crunching the figures needed to make T-levels financially viable for colleges to deliver.

The spending review is expected to take place later this year.