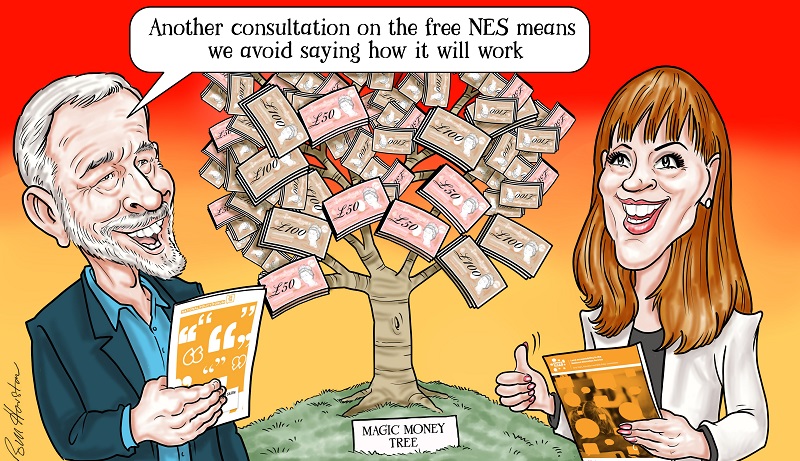 The Labour Party has launched its second consultation on its plans for a National Education Service, which will explore how to move to a system “empowered” by “local accountability”.

It will be of particular interest to colleges, considering Labour leader Jeremy Corbyn previously revealed to FE Week his plans for free lifelong learning could mean they lose their status as independent corporations and be brought back under local authority control.

In a consultation document entitled “local accountability in the National Education Service”, the party’s early years, education and skills policy commission warns that “in our haste to rectify the damage the Conservatives are doing to our education system, it could be tempting to simply return to what has been done in the past.

“But this would be a wasted opportunity,” the document states.

Labour wants to “empower” local communities “to influence change where it is needed and guarantee that the education system meets their needs”.

The party’s first consultation on the NES, which ran for 12 weeks last year, was light on detail and didn’t include any costings for how these policies would be implemented.

This new consultation, which runs until June 30, equally gives away little about the party’s vision for a National Education Service, beyond its promise to “empower” local communities “to influence change where it is needed and guarantee that the education system meets their needs”.

“By reinstating local democratic accountability, and involving local stakeholders in the creation of shared education aims trust can be built,” it states.

The six questions posed are deliberately broad and open-ended.

Labour members and supporters are asked whether they believe there should be a “single democratically accountable structure” for the National Education Service, that would “deal with each part of the system and its institutions at local and national level”.

Respondents are also asked how they would “ensure education institutions retain appropriate levels of autonomy and independence”, and to say what role they think local authorities, combined authorities, metro mayors and local enterprise partnerships should play.

In November 2017 Labour leader Jeremy Corbyn said his party feels “there’s a danger with the independent model of college education that they get too far away from local communities and local education authorities” and “we’re looking to is a model that will bring them closer to that, but not removing the important connection with local industry”.

Then, in September 2018, the shadow skills minister Gordon Marsden refused to rule out bringing colleges back under local authority control.

The National Education Service is a flagship policy of Corbyn, and seeks to emulate the popularity and support enjoyed by the NHS.

At last year’s conference, the party voted to recreate a “coherent, planned and appropriately funded national public system which is accountable to its various stakeholders and communities”. It has also set out 10 guiding “principles” which will be followed during policy development.

To help shape the NES, Labour has launched a lifelong learning commission.

One of its tasks will be to carry out work on funding models that would “ensure that education is free at the point of use for all those who need it”.