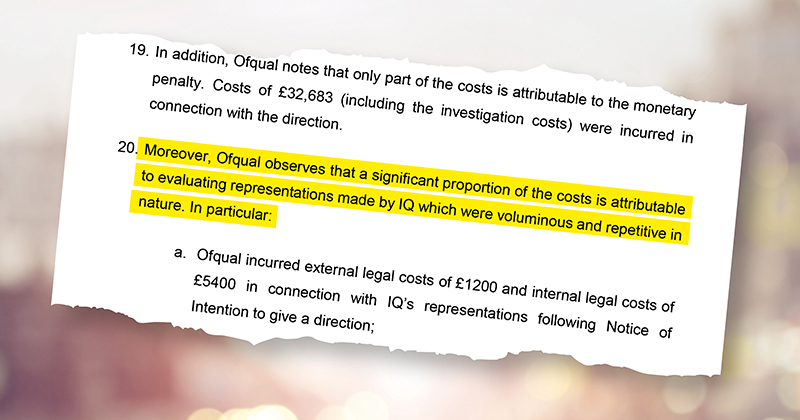 An awarding organisation has been left with a bill of over £100,000 from Ofqual – which includes the exams regulator’s highest ever costs for an enforcement action – after dropping its lengthy appeal against a fine.

But Industry Qualifications could have been forced to cough up even more, had Ofqual decided not to waive more than £30,000 of its almost £85,000 legal and investigation costs.

Paul Mills, chair of IQ, declined to comment on the appeal or the money it now has to pay – even though Ofqual blamed the awarding organisation’s approach to the case for its huge charges.

Mr Mills told FE Week that IQ had “taken actions to address Ofqual’s concerns” and was “looking forward to concluding this matter and moving forward in 2019”.

The fine related to IQ’s handling of a high-profile case of alleged qualifications fraud in 2015 involving a private training provider in Essex, which was the subject of a BBC investigation.

Ofqual first announced its intention to impose a £50,000 fine on the awarding organisation in February 2017, at which time IQ told FE Week it would appeal.

In September 2018 Ofqual confirmed its decision to impose this “monetary penalty”, plus costs of £50,000.

An update to this decision notice, published on Monday, revealed that IQ had abandoned its appeal on November 26, shortly before it would have been heard by its tribunal.

This is the sixth time that the exams regulator has issued a fine, but the first in which the awarding organisation will not have to pay all of its costs.

According to Ofqual’s notice of costs recovery, published in September, a “significant proportion” of its costs – which amounted to £84,119 – were “attributable to evaluating representations made by IQ which were voluminous and repetitive in nature”.

“In substantial part, the magnitude of the costs reflects the way in which the awarding organisation chose to make its case,” the notice said.

It would not be “unreasonable” to require IQ to pay the regulator’s full costs – and furthermore the regulator had “not seen any evidence that IQ would be unable” to do so.

But while “combined financial orders of £100,000 would not put at risk IQ’s viability”, it was “possible” that making the body pay the full costs “may put at risk” its “ability to operate as an awarding organisation, by depriving it of investment funds”.

For this reason, “Ofqual has decided to exercise its discretion to require IQ to pay Ofqual’s costs in part only”.

IQ, which offers qualifications in a range of sectors including security, fire safety and business and administration, made an “operating loss for the year to 31 December 2017 of £425,621”, according to its most recent accounts.

This included a “provision of £75,000 for fines from regulators and associated legal costs”.

FE Week reported in May 2015 that IQ revoked 251 level two and three door-supervision and CCTV surveillance qualifications it certificated for learners at Ashley Commerce College in Ilford, after the college was exposed for allegedly allowing students to gain the qualifications illegally.

But Ofqual’s notice of intention to fine, in February 2017, said that IQ had breached its conditions of recognition “in relation to its approval and management of a college, the investigation of suspected malpractice at the college and the actions it took in respect of persons alleged to have been concerned in such malpractice”.

Its monitoring of the college and its investigation into the incident were both branded “defective”, and it was criticised for having failed to “identify the potential for conflicts of interest to arise” or to manage any such conflicts.