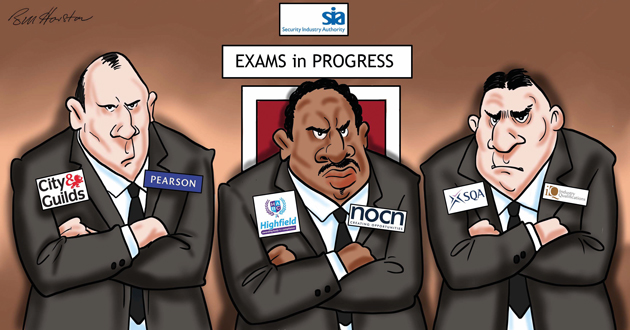 Awarding organisations have spelled out their “rigorous” anti-fraud measures for private security industry training after it emerged that 129 security guard licenses were set to be revoked after malpractice.

An undercover BBC investigation aired in March alleged staff at Ashley Commerce College (ACC), in Ilford, were prepared to sit exams for students training to work as security guards. It sparked a wider investigation into “fraudulent practices” at ACC by awarding organisation (AO) Industry Qualifications (IQ), which led this month to it revoking 251 level two and three door supervision and CCTV surveillance qualifications it had certificated for the provider.

And sector regulating body the Security Industry Authority (SIA) has now told FE Week that it had “started” revoking 129 licenses given out to security guards who passed the IQ courses at ACC.

Raymond Clarke, chief executive of IQ, said: “We carry out rigorous checks on providers. We actually visited ACC three times in the year leading up to these revelations, because of the high volume of qualifications they were giving out and they seemed to be a very good provider giving high quality training. Unfortunately, there was a back office there which we did not know about that was feeding a lesser number of fraudulent exams alongside the genuine ones. We passed on information about all 251 qualifications that were given out fraudulently to the SIA and police.”

A Metropolitan Police spokesperson said it was “working closely with the SIA” to investigate alleged fraudulent activity and the Home Office said it “will be informed of the outcome”.

Other AOs that run door supervision and public space surveillance qualifications, provided by hundreds of independent learning providers and a number of colleges across the UK, said they had strict security measures in place. A spokesperson for Pearson said it carried out “unannounced spot checks on test days on providers offering our BTec security qualifications”.

A City and Guilds spokesperson said: “We work closely with the SIA and Ofqual to make sure all centres use best-practice training methods.”

Dr David Hutchinson, deputy managing director of NOCN (previously the National Open College Network), said: “You have to be careful who you use as a training centre and we are very particular about checking them out.”

And IQ published proposals for regulatory reforms on its website following the ACC investigation. Its paper called on the SIA to issue licenses to trainers and directors/owners of private security industry training providers.

It added the SIA and exams regulator Ofqual should keep a record of centres and staff found guilty of malpractice for reference.

An SIA spokesperson said: “Any extension to the regulatory powers of the SIA would require primary legislation by parliament.”

An Ofqual spokesperson declined to comment on the proposals, but said: “We have been notified of this incident [involving ACC] and are keeping it under review.”