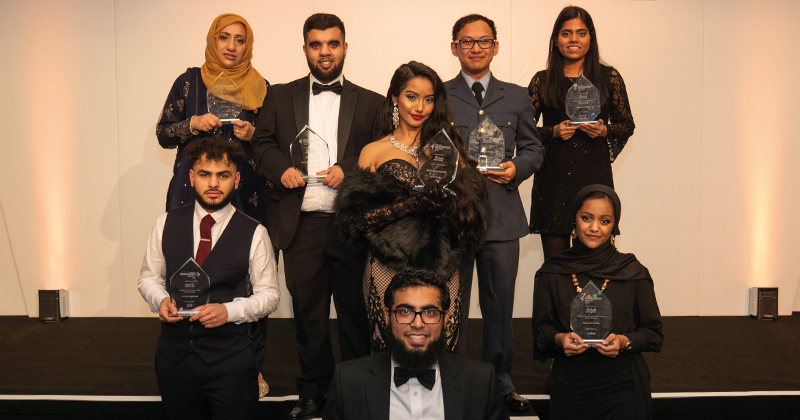 A project management apprentice and student mentor who defied his family’s wish for him to go to university has been crowned apprentice of the year at the Asian Apprenticeship Awards.

Ahmed Munshi of BAE Systems, who has mentored nine school and college students alongside his work and studies, took home the top accolade at the award ceremony in Birmingham last Thursday.

Electrical and plumbing experts JTL won overall learning provider of the year. JTL has focused on attracting more women and people from black, Asian and minority ethnic communities into the industry, and an impressive 80 per cent of their learners get their qualifications every year.

Mr Munshi, from Preston, is in the penultimate year of a five-year higher apprenticeship in project management which will lead to a degree and an associate management qualification.

Although his family hoped he would follow the traditional route to university, Mr Munshi was convinced a higher apprenticeship would be the perfect combination of academia and work.

In his entry, he wrote: “The apprenticeship has enabled me to improve my personal qualities, to be a more well-rounded individual, not simply from an occupation perspective. BAE Systems has helped me to become socially conscious, participating in activities that go beyond my day-to-day work life.

“I strongly believe a person should wake up in the morning with two feet on the ground and feel that they are making a difference to someone’s life.”

Olga Bottomley, head judge, said Mr Munshi was chosen as the winner because he had “embraced working life and his studies” and had an “incredibly strong social-responsibility ethic”.

“He had to persuade his family of the wisdom of applying for an apprenticeship, and since that point he has become a fantastic ambassador for his company and apprenticeships more widely.

“He works closely with his local mosque and he mentors other young people. He is truly someone to watch as his career develops.”

JTL has around 3,000 businesses in the building services engineering sector, and supports approximately 7,700 learners in four apprenticeships: electrical installation/maintenance, plumbing and domestic heating, heating and ventilating and engineering maintenance.

Isa Mutlib, the awards’ project director, said the awards were pleased to recognise JTL for the quality of their training and retention rate for black and minority ethnic apprentices.

“We hope we have encouraged more young British Asians to consider apprenticeships, and more employers to provide opportunities to benefit from the skills that apprentices bring.”

Mr Munshi took the prize for the engineering and manufacturing category, alongside Bombardier Transportation, while the Royal Air Force’s Niraj Gurung and employer Liquid Print won the creative and digital category.

The event was sponsored by the Royal Air Force and featured Jasmine Kundra, a contestant on this year’s The Apprentice.

The Asian Apprenticeship Awards was launched in early 2016, following a report by the former Business Secretary Sajid Javid MP which set a target to increase the diversity of apprenticeships by 20 per cent by 2020.