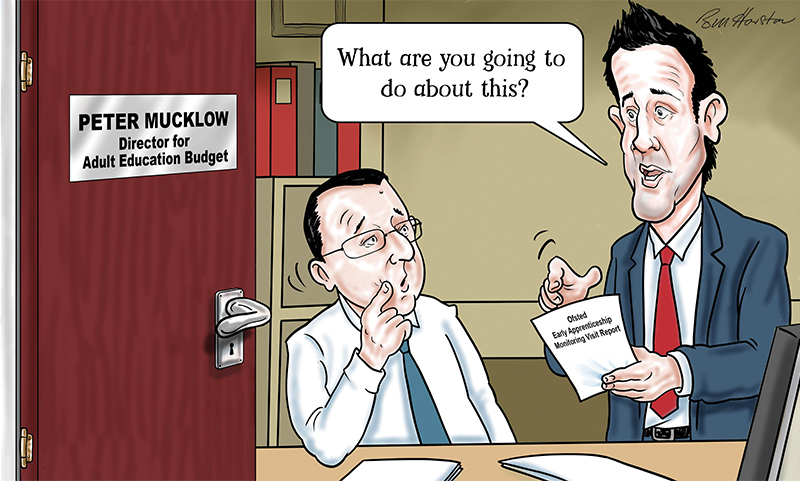 Updated policy guidance was published this afternoon by the Education and Skills Funding Agency which has finally brought some clarification to the issue that has confused providers for months.

In August the agency confirmed that any poor-performing apprenticeship provider with an ‘insufficient’ rating in at least one of the three themes under review in Ofsted’s early monitoring visits will be barred from taking on any new apprentices – either directly or through a subcontracting arrangement.

A fourth category then appeared in some reports – for adult education. But when asked by FE Week if it would ban a provider from taking on new adult learners if they were making ‘insufficient progress’ just for this theme, the ESFA couldn’t provide a clear answer.

Mark Dawe, boss of the AELP, criticised the government’s lack of clarity at the time.

“The approach is different to the approach taken on apprenticeship provision because the nature of adult provision is classroom delivery of a relatively short duration.

“Placing a stop on new starts would effectively wind down the provision before a full inspection could take place. Where we have continuing concerns over quality, we will restrict access to growth through the performance management process.”

There have been four early monitoring visit reports published by Ofsted so far that have judged adult education – but all have received ‘reasonable progress’ ratings.

As revealed by FE Week in September, the government has coughed up the full £5.4 million Ofsted requested to visit all new apprenticeship providers as it cracks down on poor provision continues.

Potentially as many as 1,200 providers could now be in scope for a two-day monitoring visit.

FE Week understands that around 30 of those have newly funded adult education funding, which will be in scope for inspection.