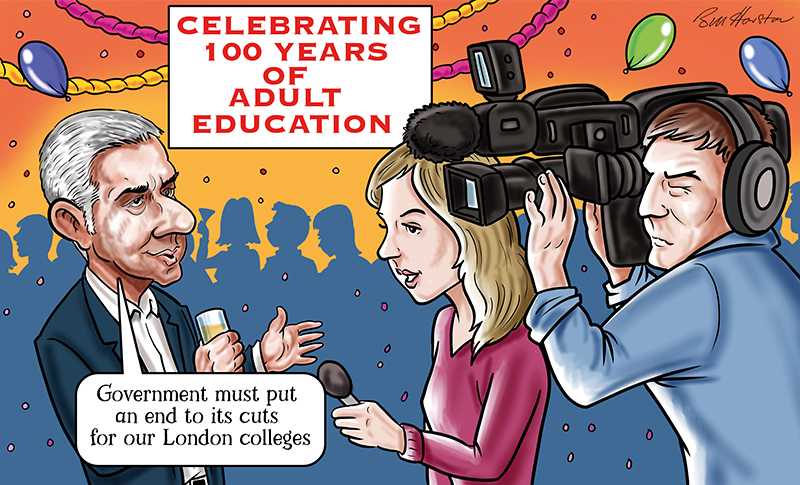 London’s mayor will host a party to celebrate taking control of the capital’s adult education budget next year – where he’ll lay out ambitions for making his skills system the “envy of the world”.

From September 2019, the Greater London Authority will have its annual £311 million AEB devolved.

Mayor Sadiq Khan has big plans for how to control the fund, including shifting its payment model away from funding qualifications towards wider outcomes such as progression into work.

Making London’s skills system the envy of the world

He’s also hoping the government will later devolve further skills funding into his hands, including apprenticeships.

To kick devolution off Mr Khan wants to hold a launch event to “set out London’s vision for future skills”.

The party will coincide with the centenary of adult education at the City Literary Institute in autumn 2019, according to minutes from the latest Skills for Londoners Board meeting, held on September 21.

“The event would celebrate the wider history of adult education in London and provide an opportunity for the board to set its vision for the future,” the minutes state.

“It would also be used to mark the launch of the commencement of the AEB in London.”

The event “presents a great opportunity to support and convene collaboration within the sector and support the mayor’s priority for creating a more strategic city-wide approach to skills” and his “ambition for making London’s skills system the envy of the world”.

There are, however, questions over whether the funding for the party will come from the capital’s AEB revenue budget, which would take more money away from frontline learning.

“The project budget required to support delivery of this proposal is yet to be fully scoped out,” the minutes state.

“It should be noted that while there is no specific budget provision for this initiative within the GLA budget, it is expected that officers will seek to contain any associated project costs within the existing revenue budgets available to the Development, Enterprise and Environment Directorate.”

If this is not possible, a “growth bid will have to be submitted for consideration as part of the 2019-20 budget process currently underway”.

FE Week asked the GLA if it was planning to use a chunk of the AEB to pay for the event, but the authority stayed tight-lipped other than to say: “No funds [are] committed to this event, which is being organised by City Lit.”

City Lit said it has asked Mr Khan to take part in its centenary celebrations, but is still waiting for his response. It would not comment on how the event would be paid for.

Mr Khan came under fire earlier this year when FE Week revealed his plan to top-slice over £3 million of the annual AEB to pay for an army of nearly 100 new bureaucrats to manage the fund.

It did however emerge last month that the idea of top-slicing from the budget was a recommendation from the Department for Education, after the GLA complained it needed extra cash to cover operational costs.

The SfL minutes also reveal that the GLA is proposing to follow the celebration event with an annual “skills summit”, which would “provide an ongoing opportunity to share best practice and to promote collaboration amongst networks”.

“While members commented that these networks already existed on a more localised level, this could provide an opportunity to bring together representatives from across the sector each year to discuss the opportunities and challenges they face,” the minutes said.

“While the proposals were welcomed, it was suggested that the skills summit be supplemented with smaller local events, in order to reach out to as much of the adult learning community as possible.”

The GLA will be launching its tendering process to award £130 million of London’s devolved AEB to independent training providers the week beginning October 22, 2018.

The remainder of the budget will be awarded in the form of grants to colleges and other institutions that currently receive AEB via a grant from the government.