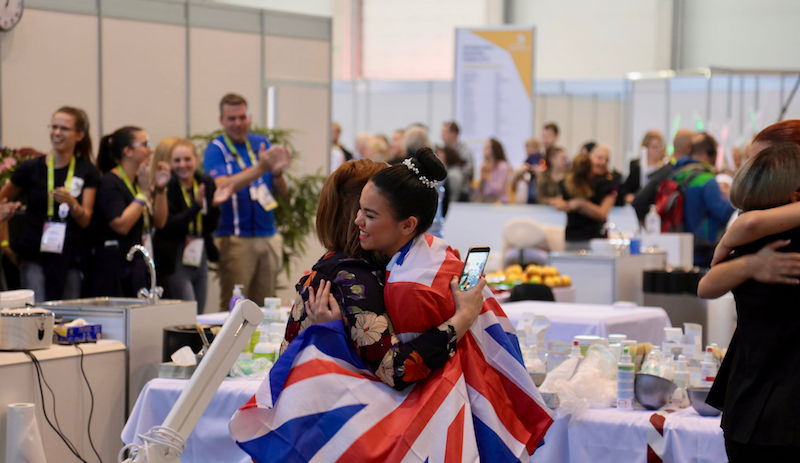 Team UK is celebrating tonight after competitors bagged one gold and three bronze medals to retain its top-10 position at EuroSkills.

The team finished in ninth place overall when these successes were combined with its medallion of excellence haul of seven.

The 20-year-old, who works and trains at Reds Hair Company in Herefordshire,  told FE Week after completing the competition yesterday that she was feeling “amazing”.

And she felt just as amazing after claiming gold.

Holly celebrated gold at a sparkling closing ceremony in front of thousands of spectators tonight at the Papp László Budapest Sportaréna, which was streamed live for the world to watch.

They were lost for words following their success.

And hairdresser Gavin Jon Kyte, who is also from Reds Hair Company, was “buzzing” to also come third in his skill.

Hairdresser Gavin Jon Kyte is buzzing to have won bronze at #EuroSkillsBudapest for #TeamUK. Here he is speaking with @feweek after tonight’s medal ceremony pic.twitter.com/iUAeUYsBVw

Dr Neil Bentley, chief executive of WorldSkills UK, said: “This is a fantastic result for Team UK and the country as a whole. We were gunning for a top ten position and we got it.

“These brilliant young people – training and preparing them to be among the very best across Europe – are the UK’s new generation of high flyers.”

He added that Budapest was a “litmus test” to see how the UK might fare when it leaves the European Union next year.

“We had an amazing result and the team worked incredibly hard, but we can’t be complacent,” said Dr Bentley.

“Other countries across Europe are investing heavily in skills development, and we need to ensure we don’t fall behind.

“Governments, employers and the education sector must embrace this success and use the energy and momentum generated here to inspire to help propel economic growth and productivity.”

They were among more than 500 other competitors from 27 other nations, who are specialists in 35 different skills from hairdressing to heavy truck maintenance, and plumbing to mechatronics.

Keep an eye out for FE Week’s souvenir supplement covering TeamUK’s journey to EuroSkills Budapest 2018, published next week in partnership with Pearson.