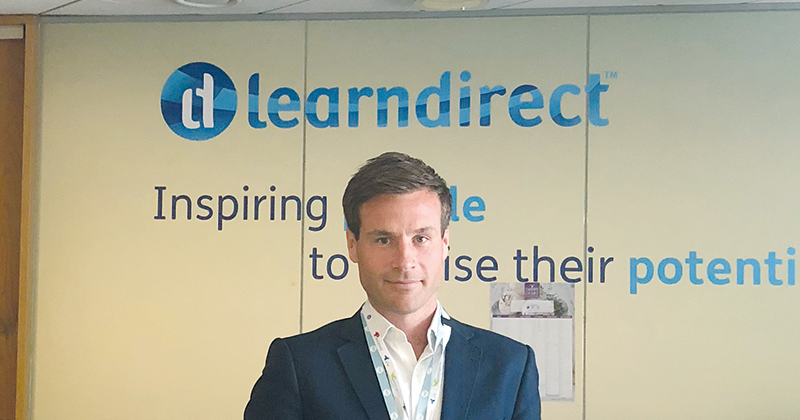 A little-known entrepreneur, Wayne Janse van Rensburg, has overnight become one of the most powerful figures in FE after taking the reins at Learndirect. He’s watched from afar as, over the past 12 months, the nation’s biggest FE provider lost a battle with Ofsted to suppress a ruinous grade four inspection report, with the fallout involving high-profile parliamentary investigations. Its government skills contracts will be fully wound down within two weeks, but that doesn’t seem to have deterred the ambitious new owner. So why would he take on such a tough project? Senior reporter Billy Camden interviewed him to find out.

But the South African-born tycoon, who claims to have dreamed of running Learndirect since he was 13, is unfazed.

“Part of my vision, and people might question my sanity here, is to bring the brand back into the forefront of education,” he says.

“I have big things I need to do in terms of reputation repair, but we owe something to the sector both in terms of a sorry, and repayment of what we have done in the past. I need this business to be an asset to the sector.”

Mr Janse van Rensburg (pictured) is determined to bring Learndirect back to its glory days.

I need this business to be an asset to the sector

The takeover from Lloyds Development Capital seemed like a rushed deal, concluded less than a week after an agreement with a company called PeoplePlus Group fell through at the eleventh hour.

So did they really have time to carry out due diligence? “We already had a fairly good understanding of the business, so to speak,” responds the new owner, somewhat enigmatically.

“Our focus over the next two or three days following the call was to build a sustainable business plan for Learndirect and LDA going forward, and challenging some of that evidence that was there for the due diligence.”

Prior to the acquisition, Mr Janse van Rensburg was a relatively small player in FE. He was the owner of Stonebridge Colleges, a distance-learning college with around 150 staff and a turnover of roughly £10 million, including a government-funded training provider called Dimensions Training Solutions.

The group has worked with Learndirect over the past two years by supplying it with a virtual learning environment through its technology company, PEARL.

This is where Mr Janse van Rensburg wants to rebuild Learndirect – through technology. And they might even offer it for free.

“I plan to keep the business and run Learndirect Ltd as a commercial training provider, as there is no opportunity for us to receive any more government funding,” he says.

“It has great content, initial assessments and diagnostics, which a lot of money has been spent on over the years.

“My ambition is to bring that into the sector and allow other training providers to use our content to support their delivery.

“Whether we charge to do that or, as part of our ‘sorry’ statement to the sector, give it away for free, that is where we want to go with Learndirect Ltd.”

Learndirect was formerly a giant of a training provider, with turnover reaching £200 million and nearly 2,000 staff. But this will all change in August once government contracts end and redundancies are complete.

Mr Janse van Rensburg expects to need only about 60 staff for the soon-to-be commercial provider,.

But it will be “business as usual” at Learndirect Apprenticeships Ltd, which currently has 350 employees. Mr Janse van Rensburg hopes it will become the “largest and most successful apprenticeships provider in the sector”.

However, life at LDA has got off to a far from smooth start.

Four senior executives – including the managing director – and 18 other employees quit suddenly at the end of June and moved to the PeoplePlus Group, the firm that only recently had a purchase offer rejected.

“I do not know their reasons for leaving,” Mr Janse van Rensburg confesses. “They obviously thought there was a better opportunity for them elsewhere.” Legal action against the ex-employees is not an option he wants to pursue: “My focus has got to be about stabilising the business and the staff that remain.”

I acknowledge that our employers were rattled by the news

On top of this, FE Week has recently learned that LDA is losing business from high-profile levy-paying employers including William Hill and Lloyds Banking (see page 13).

“I acknowledge that our employers were rattled by the news [of the sale],” says Mr Janse van Rensburg, who is “not entirely sure we were providing the service to the best of our abilities previously”.

His job is now to “communicate to them what has happened and reassure them that the ship is steady”.

Learndirect was previously run by Andy Palmer, who has taken the brunt of the blame for its downfall over the past 12 months, but who has stayed on in an “executive chair” role. Mr Janse van Rensburg says the former leader will have a job at Learndirect for as long as he “proves his value”.

Asked who is officially the boss of Learndirect Ltd, he can barely disguise his excitement at fulfilling his teenage dream: “I am the chief executive of Learndirect, thank you very much.”

Aside from the staff departures, Mr Janse van Rensburg says, two weeks into his takeover “everything seems to be going according to plan”.

The focus now is to “drive revenue into the business so it can be sustainable, and bring Learndirect back to the sector”.