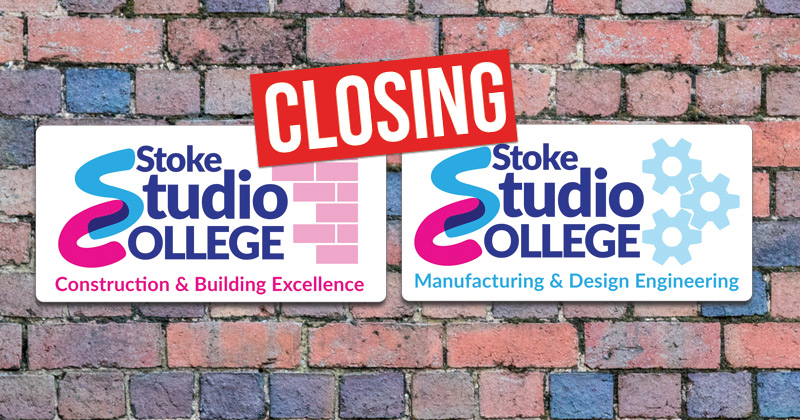 Two studio schools in Stoke-on-Trent will close by next summer amid dire problems with recruiting students.

Stoke-on-Trent Studio College for Construction and the Built Environment (CaBE) will close this August, while its sister college for Manufacturing and Design Excellence (MaDE) will close the following year.

These are the 25th and 26th of this type of vocational school to close or announce plans to do so since their inception.

It leaves just 29 studio schools, which offer a vocational curriculum for 14- to 19-year-olds, with no plans at present to close.

Ann Marie Lucy, the chief operating officer of Alpha Academies Trust, which runs both schools, said the decision to close had been made as they “have not been able to recruit sufficient students”.

“In particular the sixth form has struggled to attract prospective students,” she said. “It is a sad reality that such small schools cannot continue long-term,” she said.

A Department for Education spokesperson said it had “agreed, in principle” to the closure.

“A number of options have been explored but ministers have decided that the schools, which have not operated above 25-per-cent capacity, should close in August 2018 and August 2019 respectively,” a spokesperson said.

The CaBE studio school opened in September 2012, and is currently rated ‘good’ by Ofsted, while the MaDE school opened the following year and is rated ‘requires improvement’.

Both have a capacity of 300, but have struggled to recruit anywhere near that number – particularly post-16.

“Despite all the efforts of its governing body and dedicated staff, who have all done an excellent job, the schools’ sixth form has never been fully utilised,” said David Miles, interim principal of both studio schools.

“This is because our students have progressed at 16 to further study or apprenticeships elsewhere,” he said.

The provisional decision to close the two schools is subject to a four-week “listening period”, which will run until July 6.

If the closure goes ahead the sites will remain with Alpha Academies Trust, which plans to provide 120 alternative provision places through Reach Pupil Referral Unit, which will join the trust from September.

Just days ago, another studio school, Rye Studio School announced it too would close in the summer, after it failed to recruit even half the pupils it needed.

In addition to the 26 to close or face closure, four more of the schools were proposed but never got off the starting block.

The news will come as a blow to advocates of 14-to-19 technical education, including university technical colleges.

Persuading pupils to change schools at 14 has been a struggle for many, while others have received poor Ofsted ratings.

She took up her post as chief executive of the trust, which was run by the college at the time, immediately after leaving her job at the college.

Despite this, she still received a severance payment from the college – although it refused to explain why.