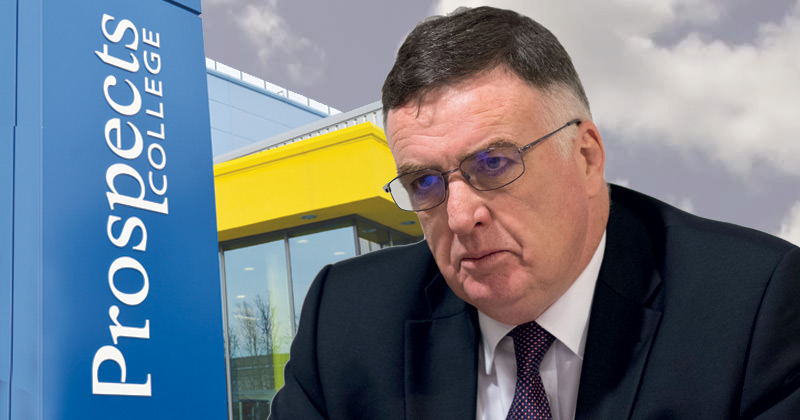 An FE college that was that was only incorporated in 2014 is no longer sustainable as a standalone institution, according to the FE commissioner, who has told it to merge.

Prospects College of Advanced Technology, which converted from an independent training provider to college status four years ago, becoming the first college to be instituted in 20 years, has been told by Richard Atkins that it is “extremely unlikely to be able to deal with its financial challenges alone”.

“It is anticipated that the result of the FE commissioner-led structure and prospects appraisal will be to identify a merger partner for the college, with a merger ideally to be completed by the end of calendar year 2018,” said an intervention report on the college published today.

It noted that the college’s “very small” turnover of £9 million is around three times less than the average for FE colleges in England, and it is “difficult to envisage the college, at this size, being able to invest in sufficient high-quality people”.

The college will not be able to pay market rates for staff in a “vibrant south-east employment market (current staff turnover is 42 per cent)” or “invest regularly in the equipment and materials needed to deliver its mission as a college of advanced technology”.

The commissioner can’t see how the college will “successfully manage multiple stakeholder relationships and compete with other providers”.

PROCAT was issued a financial notice to improve in February after being assessed to have “inadequate financial health by ESFA following a review of the college’s latest outturn figures for 2016/17 and the revised budget for 2017/18 and associated information”.

The college made a small operating surplus during its first year after incorporation (2014/15), and a small deficit the following year. However, in its third year (2016/17), the college posted a “significant” deficit.

The decline has been caused by falling learner and apprenticeship numbers, “adverse demographics”, and a decision by the previous leadership team to introduce 15 new standards to replace frameworks for apprentices.

“The extra administration caused by the new standards and the introduction of the levy, coupled with staff shortages, slowed down the process of matching employers with prospective apprentices and the college has failed to meet its apprentice recruitment target of 450 for 2017/18 by 136,” today’s report said.

The college was told to supply a draft recovery plan setting out how it will secure the college’s financial position.

However, Mr Atkins said that while identifying the key issues, the plan is “not entirely convincing and is subject to many risks”, and recommended the college introduces a finance committee, with a “full focus” on the college’s financial position.

He wants the college to invite a representative of the ESFA to “attend future board meetings as an observer, during the period leading up to structural change”, and it should arrange for governors to be trained in “funding methodologies and their implications”.

It is difficult to envisage the college, at this size, being able to invest in sufficient high-quality people

The college needs to “strengthen its leadership and management team in the short term, particularly in the area of marketing and business development”.

PROCAT is currently led by Ros Parker, who took over from the former principal Neil Bates when he retired at the end of July 2017 after more than 30 years at the helm.

Under his leadership, the Essex-based charity, formerly an independent training provider known as Prospects Learning Foundation, legally reclassified as an FE college – the first time this had been allowed by the government since 1993.

Skills minister Anne Milton was “pleased to hear” that a commissioner-led structure and prospects appraisal is “due to be completed by June 2018 which considers the full range of options including identifying a credible merger partner”.

“I am looking to you, Judith Abbot, chief executive, and Ros Parker, principal, to provide the necessary focus on the college’s financial position,” she added.

In its first ever Ofsted report in February last year, Mr Bates led PROCAT to a ‘good’ grade.