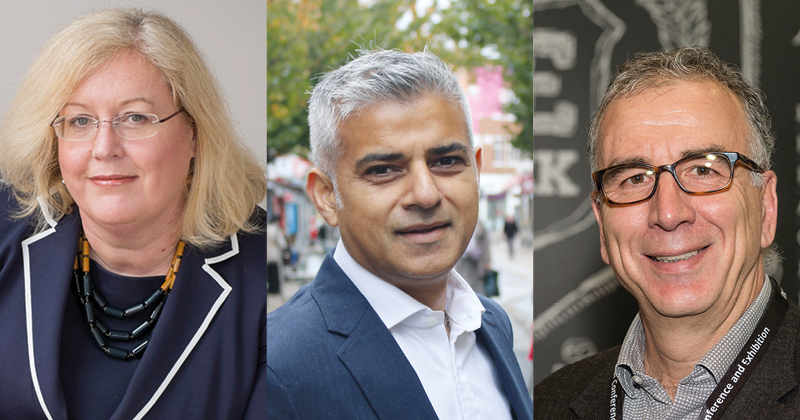 London college bosses have hit out at London’s mayor Sadiq Khan after FE week revealed he plans to top-slice £3 million from the adult education budget to pay over 50 new bureaucrats from next year.

The money will be siphoned from frontline learning to cover the wages of administrators managing AEB in the capital when devolution kicks in.

But the news hasn’t been taken well. The principal of the capital’s third largest college group, London South East Colleges, tweeted criticism within minutes of our story being published online on April 14.

“Shocking and hugely disappointing that this has been allowed to happen and divert £3 million from this underfunded sector to pay for administrative officers @MayorofLondon #accountability #valueformoney #skillsforlife ultimately hurting learners the most,” Sam Parrett (pictured above left) said.

Shocking and hugely disappointing that this has been allowed to happen and divert £3m from this underfunded sector to pay for administrative officers @MayorofLondon #accountability #valueformoney #skillsforlife ultimately hurting learners the most 😡 https://t.co/1G2gGntz9X

“It is difficult to see how the devolution promise of better long-term economic and social outcomes and the reductions in social and economic inequalities can be achieved by spending up to £3 million on administration,” she told FE Week later.

The decision appeared to be “rebalancing the books” at the Greater London Authority, “not the local economy, or the FE sector which delivers most of this provision within an already underfunded system”.

“It was always a concern, and is no surprise, that devolution will require an extra layer of bureaucracy and administration,” said Andy Wilson (pictured above right), principal of Capital City College Group, the largest group in London.

“The hope now is it will also quickly provide colleges with new flexibilities and autonomy.”

The first comment posted on our website, from Terry Bentley, said: “And so the disaster begins to unfold. Devolution = 350 AEB managers popping up around the country when 20 were doing the job perfectly adequately at the ESFA. And that 350 is just in the devolved regions! Learners shafted by self-indulgent local bureaucrats yet again.”

The 53-strong team will form a skills and employment unit to dish out the AEB from 2019/20, which will amount to around £311 million per year for London.

Its total cost will be £3.245 million per year, for which £3.028 million will be top-sliced from the AEB because it is directly attributable to budget.

Among the staff will be one assistant director, whose annual pay packet will reach £139,000. The other 52 employees will earn similarly healthy wages [see table].

However, many of the tasks they will carry out will simply duplicate the work that the Education and Skills Funding Agency already does.

The GLA blamed the ESFA for the situation, claiming it refused to give a “service offer”, which includes procurement, audit, contract management, direct access to data and changes to the Individual learner record systems.

Mr Khan (pictured above centre) is asking the funding agency to reconsider.

The GLA maintains that this decision has been forced upon it by a government refusing to provide administration funding for the AEB, despite “lobbying consistently” for more cash.

“The mayor warmly welcomes control of these devolved funds – but it makes little sense to give him responsibility for more than £300 million a year without the resource that will allow him to spend it speedily and effectively,” a spokesperson said.

He pointed out that staff costs associated with the skills unit are less than one per cent of the budget being devolved.

The Department for Education told FE Week it has agreed to provide funding to support the GLA “to prepare effectively for taking on the AEB”.

“Once the AEB has been devolved, it will be for the mayoral authority to determine how best it spends the funding to help learners,” a spokesperson added.

The situation got a mention at this week’s education select committee meeting, where the chair Robert Halfon described the plan as a “waste of public money”.

In any organisation good management is crucial to good delivery

Skills minister Anne Milton said she “hates” money spent on management but “in any organisation good management is crucial to good delivery”.

The DfE, she claimed, had “factored in” some money in the combined authorities’ budgets for administration”.

The GLA is one of eight mayoral combined authorities with deals to take control of AEB spending in their regions from 2019/20.

FE Week spoke to a number of the other combined authorities to find out about their expected bureaucracy costs when devolution rolls out, but none could provide exact figures as final budgets have not yet been agreed.

Tees Valley, the west Midlands and Cambridgeshire & Peterborough all said that they are working with the government to develop a service offer in the most cost efficient way possible to support learners.

The other areas of the country to have devolution deals in place for 2019/20 are the Liverpool City region, Greater Manchester, the West of England, and the Sheffield City region.