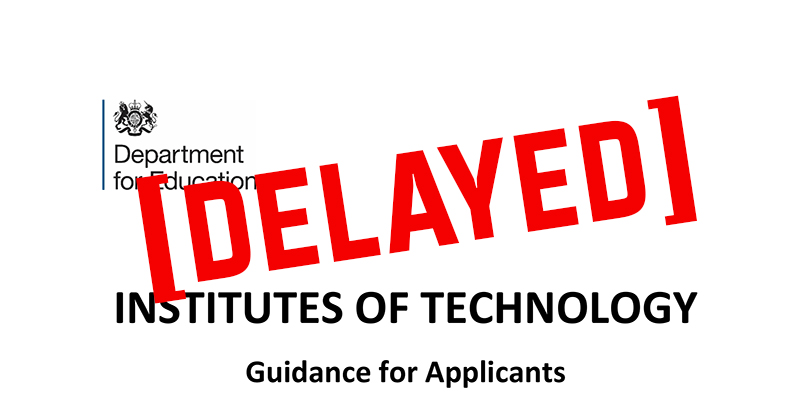 The Institutes of Technology have already fallen behind schedule, and providers who applied to open one still don’t know if they have been successful.

According to the original competition invitation, applicants should have been notified by early May whether their bids for a share of £170 million had made it to stage two.

But no communication has been sent, the Department for Education has admitted.

A spokesperson said they had “received a number of high-quality bids” during the application window, which ran from December 15 until March 1, although he wouldn’t say how many.

“Applicants will be notified of outcomes as soon as possible after a decision has been made.”

He refused to comment on whether the delay will affect the timing of stage two of the process, during which bidders submit full business proposals, which is due to open next month.

IoTs, which were first mooted back in 2015, are intended to bring together FE and HE providers along with employers to deliver technical skills training, with a particular focus on levels four and five.

The government’s industrial strategy green paper, published in January last year, included a promise of £170 million in capital funding to create the institutes.

But even though the DfE has repeatedly said the plan is to “establish high-quality and prestigious institutions”, in reality much of this cash is expected to go existing institutions rather than new ones.

It can be spent on “industry-standard facilities and equipment”, according to the DfE guidance.

FE commissioner Richard Atkins expressed doubts earlier this year whether the amount of cash on offer was enough to have an impact on the skills system.

Speaking at a House of Lords inquiry in early March, Mr Atkins said that IoTs are a “very good idea” but the “modest” amount of money means he’s “not sure it will transform the system”.

And Julian Gravatt, the Association of Colleges’ deputy chief executive, agreed that while IoTs are a “good experiment”, he fears “too much pressure” had been heaped on them to “revolutionise the system”.

When the concept of IoTs was first introduced, it was envisaged that colleges would be invited to become one.

But the 2017 Conservative party manifesto said they would be linked to universities and would offer courses at degree level – a change that confused many in the sector.

Speaking at last year’s AoC conference, a DfE official working on the policy said her team had been “equally surprised” by the move – which, it turned out, had been driven by a desire from Number 10 and the Treasury to “confer prestige” on IoTs by borrowing from the status of universities.

FE Week reported in March that a consortium led by Milton Keynes College had put in a bid for £18 million of funding to develop an IoT at Bletchley Park, former home of a world war two codebreaking centre.

The proposal, which also included Microsoft, City and Guilds and Cranfield University among others, would see 1,000 learners a year taught fields such as network engineering, applications development, intelligent systems, games development and cybersecurity.