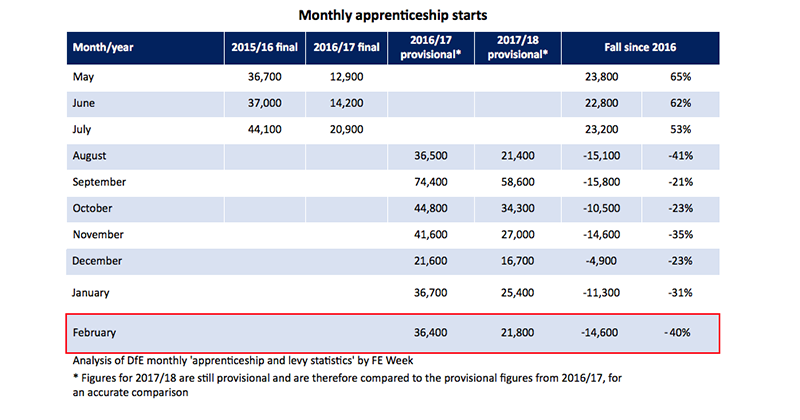 Apprenticeship starts were down a massive 40 per cent in February on the same period in 2017, the latest provisional government statistics have revealed.

There were 21,800 starts reported for the month, compared with February 2017’s provisional total of 36,400, according to the Education and Skills Funding Agency’s monthly apprenticeship statistics update, published this morning.

This represents this biggest year-on-year percentage drop since last August.

Mark Dawe, the chief executive of the AELP, claimed that the apprenticeship levy itself isn’t the problem, but that the “the manner of its implementation is letting down thousands of SMEs and young people across the country”.

“Our simple solution has been sitting on the minister’s desk for months, namely that for the time being the government should stop charging small employers for taking on young apprentices at levels two and three,” he said. Action must be taken now if the government wants to achieve its manifesto target.”

But skills minister Anne Milton insisted the government is “unapologetic” about its ambition for “high-quality apprenticeship opportunities” that are available to “everyone, regardless of their background”.

The latest figures come in the same week that education secretary Damian Hinds was quizzed by MPs on the fall in starts in Parliament on Monday.

He said there had been 242,100 starts since the levy was introduced last April.

“We are in a period of change, and some employers are taking longer to bed down what they are going to do with their apprenticeship levy money,” he conceded.

“We must bear in mind that they have two years to do that with each month’s money, but we are seeing a shift to longer, higher-quality apprenticeships, and that trend is to be welcomed.”

Mr Hinds added that the apprenticeship levy is an “important structural reform to the way we do training provision in this country” intended to “make sure that all sizeable firms are contributing to upskilling the nation”.