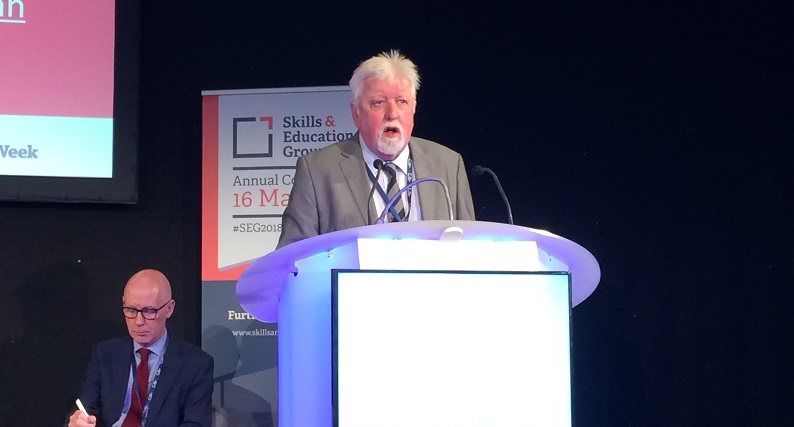 The days of the charismatic principal are gone, according to a deputy FE commissioner.

John Hogg (pictured above) told delegates at the Skills and Education Group’s annual conference in Nottingham today that the role of college bosses is changing.

A former principal of Middlesbrough, Wolverhampton and Coventry colleges, he also warned that some colleges leaders have lost sight of reality as they desperately balance their book.

“The days of the charismatic principal I think are gone,” Mr Hogg said.

“I think good colleges are those where the leader says ‘I am going to appoint people who know more than me’. It is changing exponentially.”

The days of the charismatic principal I think are gone

Speaking with FE Week afterwards, he insisted that principals have to “avoid a situation where they see themselves as the experts in finance and curriculum and all the areas, it is about teams”.

“You are the leader and be charismatic by all means but employ people who are experts in their fields,” he added.

His comments run contrary to what the FE sector is currently experiencing in terms of principal pay.

The University and Colleges Union has lambasted many principals as “greedy and hopelessly out of touch” after new analysis showed a third enjoyed raises of more than 10 per cent last year.

Seventeen enjoyed annual salaries of over £200,000.

FE Week revealed last week that Garry Phillips, the boss of Ealing, Hammersmith and West London College was given a huge 31-per-cent salary increase in 2016/17 – taking his wage to £260,000, more than double the second-highest paid person at the college.

These massive raises are all the more controversial given that college staff across the country have been driven to strike action after they were offered a measly a one-per-cent increase of their own.

“Principal pay should be reflective of the financial wellbeing of the institution and the sector,” he told FE Week.

“My own view is if staff are performing well but aren’t getting the salary to reflect that then as a principal I would reflect the same thing.”

He also warned colleges that they focus too much on the need to make themselves financially secure. “I go into colleges sometimes, and it is not about them being malicious, but there is a danger that they are so keen on becoming secure in themselves [financially] that they sometimes lose sight of the reality of life,” he said.

“One college I went into, I said ‘why have you predicted so much 16-to-18 growth?’ The answer was because it is a declining demographic and ‘we will do them through apprenticeships’. I said that is displacement activity, where are you doing that?

“We use terrestrial intelligence whereas some institutions in a desperation to make the books match use astral intelligence. They think there is a holding bay of 16- to 18-year-olds up there waiting to come down the golden ladder.”

Colleges across the country are undergoing financial crises. Many have been hit with finance notices to improve and require FE commissioner intervention.

Many are shedding staff, who are striking as a result. Hull College, for example, is proposing to cut up to 231 full-time jobs.

“Colleges need to build up a really pragmatic structure curriculum plan that is fully costed and reflective of the demographic they are working in that reflects the needs of employers rather than what the college thinks what it might need to balance the books the following year,” Mr Hogg said.

The Skills and Education Group annual conference is taking place today in Nottingham. FE Week is media partner. You can follow us on Twitter for live updates @feweek and using the hashtag #SEG2018.