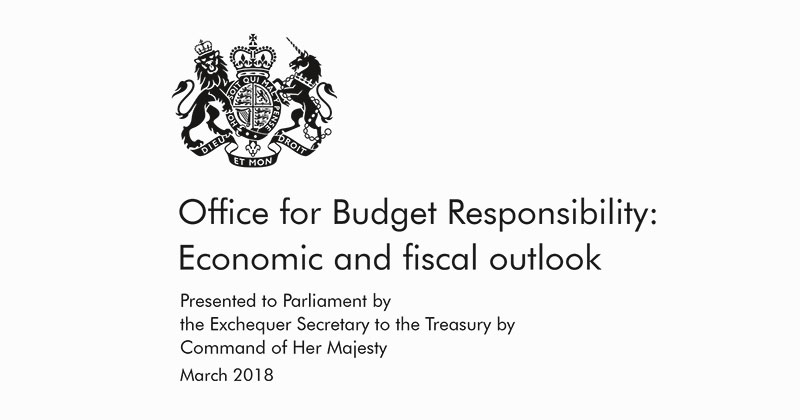 The apprenticeship levy will generate £900 million less funding in its first four years than the government first claimed, according to economic forecasters.

A new “economic and fiscal outlook” report from the Office for Budget Responsibility estimates the tax will accumulate £10.7 billion by early 2021.

This represents a major downgrade – of £900 million, or eight per cent – in the body’s original forecast that the levy would generate £11.6 billion, which was made when it was announced in 2015.

“We have revised down receipts from the apprenticeship levy by £0.1 billion a year relative to November,” the report said.

Our latest forecast is that this will raise a cumulative £10.7 billion in its first four years

“Having only been introduced in April last year, the profile of monthly receipts is still uncertain. However, with 10 months of revenues received by HMRC, it seems likely that full-year receipts will be lower than expected when the measure was first costed.”

Expenditure on apprenticeships in the 2016-17 financial year was just over £1.6 billion, according to government accounts, split equally between 16- to 18-year-olds and adults.

So despite the downgrade, funding available for apprenticeship delivery is now around £1 billion higher than before the levy was introduced.

The apprenticeship levy is paid by employers with annual payrolls in excess of £3 million. It is charged at a rate of 0.5 per cent.

The OBR noted in 2015 that the levy is “economically equivalent to a payroll tax” and expected “the cost to be passed largely onto employees in lower wages”.

The original costing expected the measure to generate £2.7 billion in 2017-18, rising steadily thereafter.

“Since the original costing we have made regular downward adjustments to our earnings forecast and, though this has been partly offset by higher expected employment growth, the overall effect is to lower the apprenticeship levy forecast,” the OBR has now said.

“The levy came into force in April 2017 and HMRC statistics show that £1.8 billion of cash receipts have been received in the first nine months. Our latest forecast is that this will raise £2.6 billion in 2017-18 and a cumulative £10.7 billion in its first four years, an eight-per-cent drop from the original costing.”

The OBR’s report was published on the same day that the skills and apprenticeships minister, Anne Milton, told a House of Lords committee that she wants more money from the Treasury to expand the levy.

“I would like simply to expand the programme,” she said yesterday. “I would have to have that discussion with the chancellor as it is below my pay grade because we would probably have to have more money in the system.”

Robert Halfon, chair of the education select committee and a former skills minister, also wants to see the programme widened and believes this should be done by making employers with annual payrolls of £2 million pay the levy.

“And we could do this by broadening the levy’s remit, so that employers with a salary roll of £2 million qualify.”

The OBR is an advisory non-departmental public body set up by the government to provide independent economic forecasts of public finances.