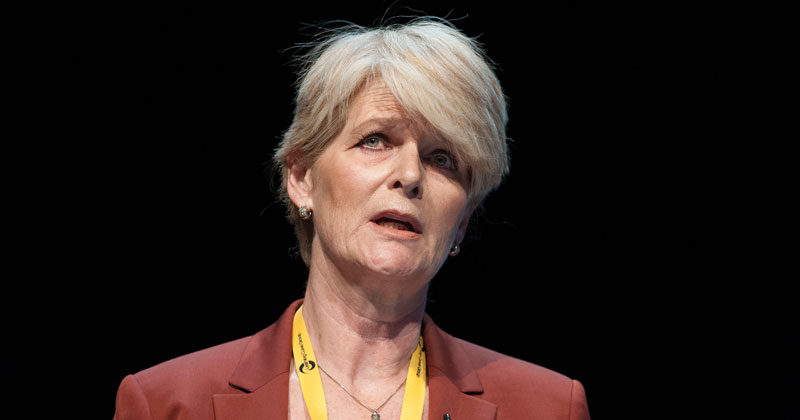 The chair of a London college has vowed to stay on after the FE commissioner cancelled a merger she had tried to force through against huge local opposition.

Mary Curnock Cook (pictured above) has endured a torrid time since taking over as chair of the board at Kensington and Chelsea College last May, which culminated last month in Richard Atkins calling off the merger with Ealing, Hammersmith and West London College.

But the former boss of the Universities and Colleges Admissions Service has announced she will be staying “to a secure and successful future” for KCC, amid calls from campaigners for her to quit.

She started as chair around the time a huge scandal broke surrounding the £28 million sale to the local council of its Wornington Road campus, in north Kensington, without public consultation.

There was huge public outrage as it emerged the Borough of Kensington and Chelsea planned to build housing over most of the site, leaving a much smaller space at best for learning.

Ms Curnock Cook reached an agreement with RBKC to pause the redevelopment, but she repeatedly refused to cancel the merger, which campaigners opposed due to fears the resulting super-college would not retain the contentious Wornington campus in the long term.

She claimed at the time that merger was needed to address grave financial problems resulting from years of decline exposed in the commissioner’s diagnostic assessment report, which agreed that KCC was no longer “financially sustainable as a standalone institution”.

But the board conceded in a meeting this month that “there was more we could have done to secure local community support for last year’s merger plans”.

“Ultimately, it would not have been in the best interests of the college’s students and staff to proceed,” said Ms Curnock Cook. “I don’t pretend that this was an easy decision.”

The college will now cooperate with a new commissioner-led structure and prospects appraisal seeking a different merger partner.

The board has also agreed to form a new advisory group to “represent our communities in Kensington and Chelsea and engage them in the process of considering options for the future”.

It will also commission an independent review of “the process surrounding” the Wornington sell-off, and aim to sign a long-term lease on the site with the council.

Ms Curnock Cook insisted she retains full backing from the board.

“I have always seen my role to steer KCC to a secure and successful future,” she said. “This continues to be my priority.”

The FE commissioner said in his report, also made public this week, that the scrapped merger process had been “objective and thorough”.

However, it “was limited in the range of future options considered, and did not include sufficient focus on the future of FE provision in north Kensington in the selection of a partner”.

“While the commissioner recognises the ongoing work of KCC to implement an effective communications strategy, the perceived lack of student communication appears to have resulted in some suspicion and misinterpretation regarding the direction the college is moving in,” he wrote.

“The college has an underlying operating deficit of around £3 million in cash terms each year. This is clearly not sustainable.”

It forecast an operating deficit for the college of £3,771,000 for 2017/18, and money generated by the Wornington sale is clearly diminishing.

It emerged that £3.2 million from the proceeds was used to pay off bank debts, and “approximately £2.7 million of the cash proceeds were used in 2016/17 to support the ongoing operations of the college”.

Save Wornington College campaigners, led by Grenfell survivor Ed Daffarn, want the skills minister Anne Milton, who has personally intervened in the case, to force RBKC to give the campus back to the college.

This would avoid the long-term financial burden of yearly rent.

They are confident they will be heard, not least because the site stands in the shadow of Grenfell Tower, the block of flats ravaged by fire last summer killing 71 people. They claim retaining further education in the locality for the sort of poorer residents who lived there is now viewed as “reparations”.