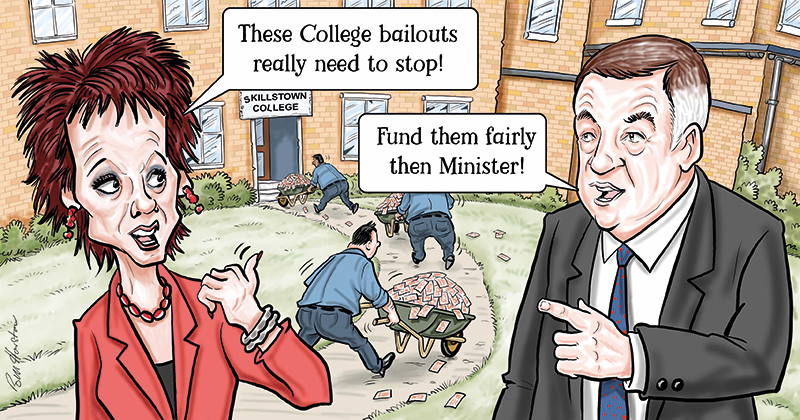 Financially struggling colleges should seek bailouts from the restructuring fund while they still can, the FE commissioner has said in his annual report.

“There remains an opportunity for colleges, while the restructuring facility is available, to access support to put them in a strong position ahead of the introduction of the insolvency regime and the end of exceptional financial support,” said Richard Atkins.

His advice contradicts previous statements from the Department for Education – which insisted the facility can’t be used to prop up failing colleges – and there are growing concerns about transparency.

“There remain a number of colleges that need to improve their financial health, including some that remained standalone following the area reviews,” he wrote. “It is vital that colleges carefully review forward financial plans – including testing income assumptions.”

The annual report – Mr Atkins’ first since being appointed FE commissioner in November 2016 – covers his work over the year from September 2016 to August 2017.

It gives an overview of colleges’ health, and identifies any challenges facing the sector – as well as detailing Mr Atkins’ expanded role in supporting colleges.

The report doesn’t mention any colleges which have been successful in their applications to the fund.

A number of colleges in financial difficulty have applied for cash from the fund, which is designed to support changes recommended in the area reviews that are too expensive for the institutions in question.

There was a massive £25 million injection expected at Lambeth College this month, even though its merger plans appear to have hit the buffers.

During a Commons education committee hearing last week, Mr Atkins dodged claims by the chair Robert Halfon that the restructuring fund was being used to prop up failing colleges.

He said that 17 out of 35 area review-recommended mergers had “benefitted from restructuring funds”, but wouldn’t be drawn on transparency questions.

“I don’t have responsibility for allocating those funds,” he said, acknowledging that “openness and transparency is really important in running any organisation”.

He also described funding for FE as “unfair”, and told MPs that financial pressures could be at least partly to blame for falling standards within the sector.

His annual report revealed that just four colleges subject to intervention because of financial problems had managed to lift themselves away from his oversight over the past year – and that all four had merged with a stronger institution.

According to information published by the DfE in November, 10 applications to the fund worth a total of £120 million had been approved to date.

But skills minister Anne Milton told parliament on Monday that “we have approved £300 million of restructuring money”.

Information on the number of applications that covers is due to be published shortly, according to the DfE.

A spokesperson previously said: “The restructuring facility is not being used to prop up failing colleges.

“The restructuring facility is designed to help colleges make major changes following an area review recommendation that they cannot fund themselves and that will result in high quality provision for the local community.”