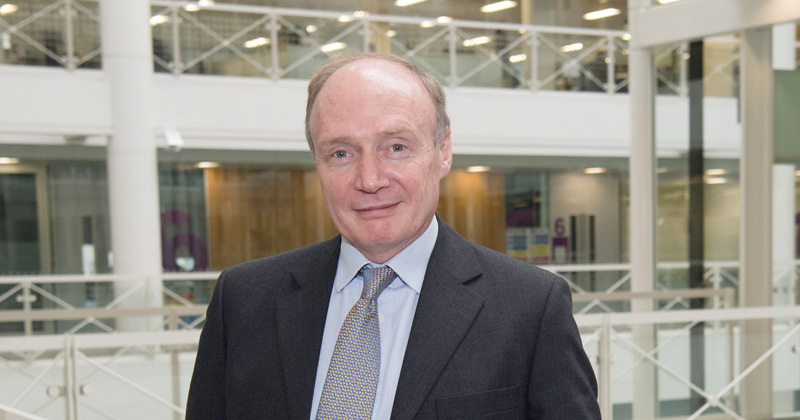 Sir Gerry Berragan only has two years as chief executive of the Institute for Apprenticeships because he did not go through a full recruitment process, he has admitted.

A former IfA board member, he revealed that he was recruited in unusual circumstances during an in-depth interview with FE Week, published next week, and spoke candidly about the regulator’s struggles to find the right person for such a demanding role.

Sir Gerry, once a senior figure in the army, said he only decided to “throw my hat in the ring” after the institute endured a fruitless sixth-month hunt.

His appointment was finally announced in November.

“All I know is that by mid-to-end October, it had reached a stage where they had not found a candidate that fitted all the criteria, and that was a frustration because we knew Peter Lauener was going to retire at the end of the year,” said Sir Gerry in his first media interview as chief executive.

The search for a full-time successor to the outgoing Lauener, who was also coming to the end of his stint as chief executive of the Education and Skills Funding Agency, and who now runs the Student Loans Company, began in April.

The initial recruitment round had no success so the IfA turned to headhunters in July, and is understood to have held a second round of interviews over three weeks during the first week of October.

“There was a bit of an imperative to get someone in place,” said Sir Gerry. “That’s when I said to the chairman ‘well, you know, if you want I’ll throw my hat in the ring’.”

“I went through interviews with the chairman and one of the other panel members, and also with the minister,” he continued. “Once that happened and I got the offer, which was only a couple of weeks, I resigned from the board at that stage.

Sir Gerry served as a soldier for 37 years and was appointed to the IfA board in January.

He was previously the army’s apprenticeships ambassador, and led efforts to make it the largest provider in the country, offering more than 45 schemes.

Last year’s original advert for the chief executive role said that the position would be appointed on a fixed-term contract of up to five years, with a salary of up to £142,500.

“Whatever happens, after two years I’d have to reapply. So let’s see when that comes,” he said. “I think two years is quite a long time, I think you can do quite a lot in two years. And we’ll see what happens after that.”