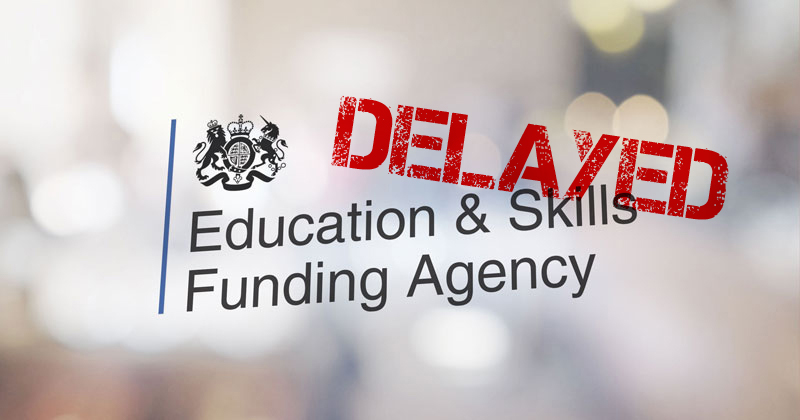 The ESFA is extending the non-levy tender’s 10-day standstill period to December 28, meaning no contracts will be given to successful providers next week, FE Week understands.

Results of the procurement, which has frustrated the sector all year after being plagued with delays and an aborted first attempt, were finally released on December 7.

The outcome has been seriously questioned by many, after an FE Week investigation found that a contract was awarded to a provider that went bust two months ago – even while several high-profile colleges ranked ‘good’ or ‘outstanding’ missed out.

One provider with over 30 years’ experience in delivering apprenticeships even threatened legal action after being denied allocations.

A 10-day standstill period immediately got underway after the release of results, which is standard in procurement processes, and meant that providers could contest the allocation they got, or appeal the decision not to award them a contract.

Providers that won contracts, however, were expecting them to be handed out on December 18.

But the ESFA has decided to extend this by a further 10 days, and will now only hand out contracts after December 28.

Responding to the delay, AELP boss Mark Dawe said: “While FE Week deserves congratulations on its scoop, is this a transparent process or not?  It’s clear that the procurement is damaging the whole of the programme reforms and the social mobility agenda.

“AELP’s legal advice suggests that all providers who have passed the tender criteria can be given at least a minimum contract without breaching the existing tender rules. If the extension allows the ESFA to sort this mess out, it is welcome.”

The decision, which is expected to be announced on the Bravo tendering site later today, is likely to have been made following the catastrophic fallout of the tender.

A total of 714 training providers won contracts in the £650 million procurement, but nearly a third of did not have an apprenticeships allocation last year.

One ‘outstanding’ provider now faces a significant challenge to survive after it was only awarded a fraction of the funding it said it needed.

Other high-profile providers, such as the Ofsted ‘outstanding’ Exeter College, were denied contracts altogether.

The outcome led Mr Dawe to describe the situation as a “Wild West of apprenticeship contracts and delivery”.