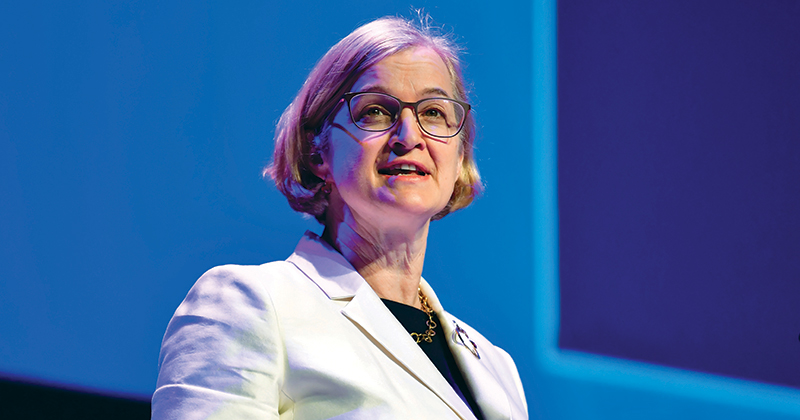 The first annual Ofsted report delivered by Amanda Spielman has warned that the ignominious fall of Learndirect shows that “no provider is too big to fail”.

The chief inspector unveiled her report for 2016/17 this morning, confirming FE Week’s predictions that it would warn of declining performance for both general FE and sixth-form colleges.

It drew attention back to Learndirect, which was rated ‘inadequate’ over the summer.

“This year, the case of Learndirect has shown that no provider is too big to fail. That raises questions for us and for government about failure in market regulation and whether incentives drive the right behaviour,” the report said.

This reflects comments made during an exclusive interview with the chief inspector in the wake of the scandal.

The report appeared in August, in the wake of a failed legal attempt to quash it, and a gagging order which FE Week successfully overturned.

The report has also commented on the apprenticeship levy, which was introduced for large employers by the government in April.

“The apprenticeship levy is raising a very substantial amount of money to fund training,” it said. “This carries the risk of attracting operators that are not committed to high-quality learning.”

Since the levy launched, there have been fears that it is driving a massive rise in higher or degree-level apprenticeships at the expense of lower levels, as employers are keen to upskill existing staff.

“Most apprenticeships delivered in 2016/17 were at levels two and three, yet over a third of the standards ready for delivery were at level four and above,” Ms Spielman wrote.

“If this trend continues, there will not be enough approved standards at levels two and three. This could have a detrimental impact on the recruitment of 16- to 18-year-olds into apprenticeships.”

The report added that Ofsted will over the coming year review how it inspects apprenticeships “in the context of the new apprenticeship levy, including how we inspect sub-contractors”. This will come as a relief to many in the sector who are frustrated that Ofsted has still not started directly inspecting subcontractors, despite an apparent change in the rules last September to allow for this.

It also confirmed FE Week’s analysis from last month, which showed an eight-point fall compared with the previous year in sixth-form colleges with a grade one or two in 2017.

Until 2017, the proportion of SFCs receiving the top two grades had climbed every year since 2012. It rose from 72 per cent five years ago to an impressive 89 per cent in 2016.

But figures to September this year show that the proportion rated ‘good’ or ‘outstanding’ had dropped to 81 per cent.

Our analysis also found that 69 per cent of general FE colleges were rated ‘good’ or ‘outstanding’ by August 31, amounting to an overall decline for the third year running.

Seven general FE colleges subsequently managed to dig themselves out of failing grades in the early part 2017/18, but this success is not expected to be recognised in the report, which will only look at inspections published in 2016/17.

The findings backed up Ms Spielman’s recent comments to the education select committee, when she admitted that colleges “have the biggest funding challenge” and said Ofsted had seen “disappointing outcomes” in FE.

Former chief inspector Sir Michael Wilshaw delivered his fifth and final annual report last December, when he warned that the government’s maths and English compulsory GCSE resits policy, which has placed huge added pressure on colleges having to lay on extra classes and delivered poor results, was not working out.

Spielman accepted this time that “this has not changed”.

“In seven out of 10 colleges that improved to ‘good’ this year, English and maths were still weak,” she wrote.

“While the policy’s intention to improve literacy and numeracy levels is well intentioned, the implementation of the policy is not having the desired impact in practice.”