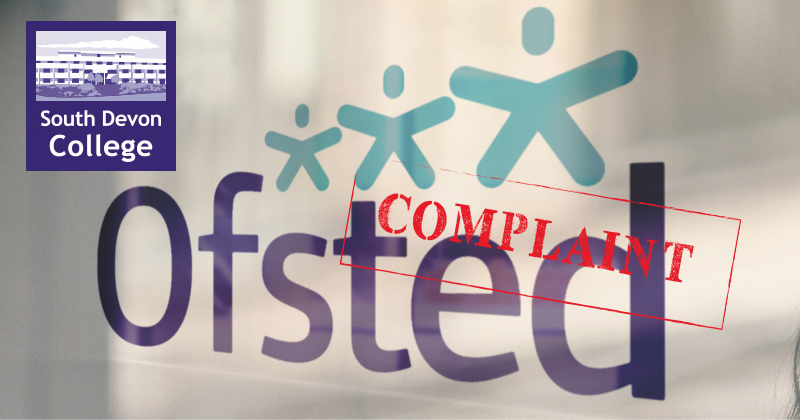 A college has complained to Ofsted about a grade three verdict on its 14-to-16 provision, which it claims failed to recognise the special challenges involved with teaching at this age.

South Devon College was rated ‘requires improvement’ for this headline field in a report published last week, in which its overall grade dropped from ‘outstanding’ to ‘good’.

The college confirmed today that it has complained to Ofsted.

“We are extremely disappointed that Ofsted was unable to recognise the innovative curriculum that we offer, the exceptional feedback we receive from parents, and the excellent GCSE results which our pupils achieve,” they said.

“The government’s new Progress 8 score measures the overall progress of pupils between the end of primary school at age 11 and the end of year 11 at age 16. Unfortunately, the report does not recognise either the fantastic progress which our pupils make in the two-year period with us from 14 to 16, or their progress to excellent destinations in A-levels, vocational courses, and grammar school sixth forms.”

It added that full-time 14-to-16 provision is “highly personalised with vocational options beyond what is traditionally offered in many schools”.

Examples of feedback from parents included such statements as “her confidence and grades have grown in huge amounts since joining”, “never did I imagine she could have increased her scores this much”, and “he has made fabulous progress, without a doubt the best decision ever made”.

Progress 8 aims to measure how students have advanced from the end of primary school to key stage four (14 to 16). It first took effect for provider accountability in June 2016.

Ofsted’s report on South Devon College warned that expectations are not always high enough for 14- to 16-year-olds.

“Staff expectations of what learners can achieve in some academic subjects, including English, mathematics and science, are too low,” inspectors wrote.

“Staff are too ready to use learners’ prior difficulties or negative experiences at other schools as a reason for underachievement. Many learners who join the school are of high ability and, even allowing for previous underachievement, are not pushed to achieve their potential.”

A spokesperson for the inspectorate would not comment directly on the complaint.

“Ofsted does not confirm or comment on any complaints we receive,” he said. “That said, we take all concerns seriously and consider them as quickly as possible.”

Colleges have been able to teach 14- to 16-year-olds for the past four years, but relatively few do so. The Education and Skills Funding Agency only lists 19 that intend to enrol for that age from October this year.

You can read more on issues surrounding how colleges deliver 14-to-16 provision in a special investigation in the upcoming edition of FE Week.