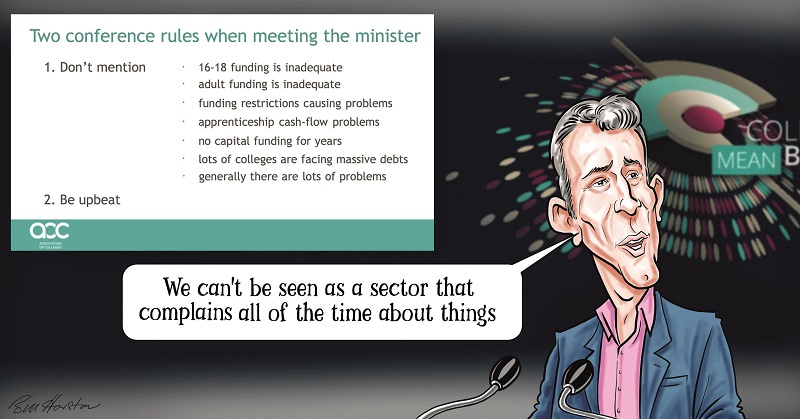 David Hughes has “serious concerns” about the unstoppable rise of management apprenticeships and the consequent lack of opportunities for young people.

In an exclusive interview with FE Week ahead of the AoC’s national conference next week, the organisation’s boss warned that FE would end up with a “polarised system” if the numbers taking apprenticeships in management continued to balloon.

“You end up with more and more degree-level apprenticeships which are inaccessible to people who aren’t already in decent jobs,” he said.

FE Week revealed last month that management has soared in popularity to become the second most common apprenticeship framework.

The figures gave further validation to fears raised by other sector figures that the apprenticeship levy would encourage businesses to use funding for management courses for existing employees instead of offering lower-level apprenticeships to young people.

“I know employers say they own it, but to me it is a tax that pays for the apprenticeship programme which should be about productivity and about social mobility,” Mr Hughes said. “That really worries me, that polarisation.”

The AoC boss told FE Week he was also “seriously worried” about the government’s new Institutes of Technology, which are set to launch in 2019.

“They are too much looking at level six, where partnerships are led by universities, whereas I think it should be more starting at level three and ran by colleges,” he said.

“Having higher levels as a potential end-point is fine but actually the big trick is how we persuade people currently of the working age who actually don’t have the skills that are going to work in the next 10 years to invest in themselves to do some training.”

He said that any bids from colleges to become IoTs should require a partnership with a university, but that there is a difference between “a partnership led by colleges with progression to university” and something that’s “university-led with a little bit of progression from levels three, four and five”, and that the former “what we need”.

He discussed his fears about the government’s restructuring fund and the mandatory work placement component of T-levels.

But despite his various concerns about the technical education reforms, Mr Hughes said he wants delegates at the AoC’s conference next week to be “upbeat”.

“And what does that mean practically? I think the rub, the really important bit, is the sector needs to get its attitude to FE and to the government right,” he said.

“We can’t be seen as a sector that complains all of the time.

“There isn’t enough funding and support for people who want to do levels three, four and five, there is no capital funding and hasn’t been for years, lots of colleges are facing massive debts from previous capital. There are lots of problems.

“We could talk about those for two days and we could walk away feeling really bad or we could put those aside, not forget them or pretend they don’t exist, but start talking about what the country needs in terms of skills in the next five to 10 years, particularly because of Brexit.

“And who will deliver on that? Much of the delivery around social mobility and productivity and skills shortages will come from FE colleges, that is a massive opportunity and we have got to see that.”