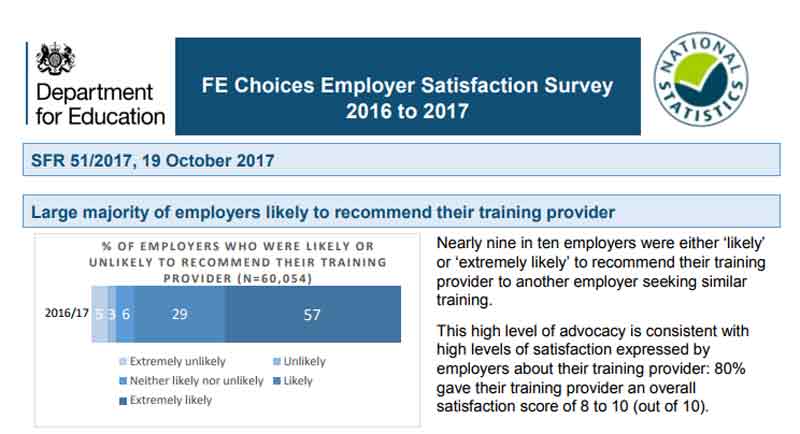 Private training providers have once again proved themselves to be more popular with employers than colleges, according to government research – though the gap is narrowing.

A huge 88.1 per cent of the more than 60,000 employers surveyed said they were satisfied with ITPs, according to the Education and Skills Funding Agency’s latest employer satisfaction survey, based on training in 2016/17, while 84.6 per cent said the same of colleges.

Those scores – based on the median rating for the 202 colleges and 288 private providers with sufficient employer satisfaction feedback to be counted in the FE Choices data – are both higher than last year’s, indicating that overall satisfaction is on the up.

The proportion of employers either “likely” or “extremely likely” to recommend their training provider to others is also up – to 86 per cent, an increase of six percentage points on last year’s results.

In fact, scores across all providers and all measures are up compared with last year – by two or three percentage points.

However, the survey highlighted a number of differences across company size and type of training.

The survey also found that employers using providers to deliver non-apprenticeship training were “consistently more positive” than those delivering apprenticeships.

“Employers delivering apprenticeships to 16- to 18-year-olds only were least positive about the training,” the survey found, although those with “both young and adult apprentices” were “significantly more positive”.

The majority – 67 per cent – of employers said they did not pay towards the cost of their training, while 24 per cent said they did.

Perhaps worryingly, eight per cent said they did not know if they were paying or not.