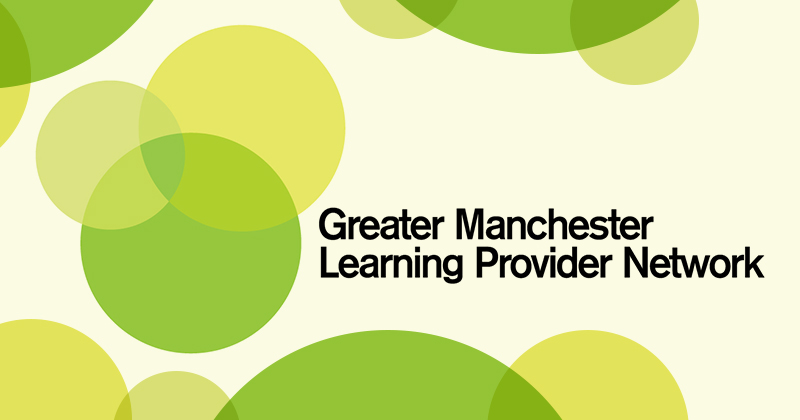 Apprenticeship starts in one of England’s largest cities have shown a “notable and significant decline” since the introduction of the levy, according to local training providers.

A total of 50 “established and reputable apprenticeship providers with a strong track record of apprenticeship delivery” completed the Greater Manchester Learning Provider Network apprenticeship impact survey, which compared starts between June 1 and August 31 this year with the same period last year.

The drop has emerged just a day before the government publishes its own figures on the overall number of apprenticeship starts for the final quarter of 2016/17.

It is feared this will also show a dramatic drop, as anecdotal reports abound that starts have tumbled since the apprenticeship levy came into force in May.

At the same time, the “overwhelming majority” of providers reported a drop in demand from both levy and non-levy-paying employers – some are even reporting a full 100-per-cent decline in demand.

Mark Dawe, the chief executive of the Association of Employment and Learning Providers, said the survey findings were “particularly alarming” as “Greater Manchester is a mature apprenticeship market populated with many good-quality providers, so it’s really worrying to think what it will be like elsewhere”.

“Having surveyed our members who deliver over 85 per cent of apprenticeships in Greater Manchester, it is clear that the reforms have led to a significant and dramatic reduction in starts. The funding reductions, off-the-job training requirements and mandatory employer contributions have depressed employer demand,” he said.

“Of great concern is the drop in level two apprenticeship opportunities. At a time when government is prioritising social mobility here we have an example where their policy in action is taking us in completely the wrong direction.” 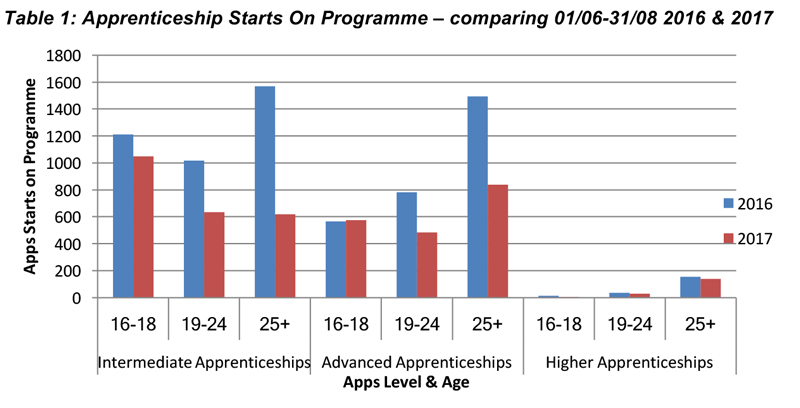 The government will publish its latest statistical first release tomorrow, which will include figures on the overall number of apprenticeship starts for the final quarter of 2016/17.

Figures published last week revealed that barely half of eligible employers were registered with the apprenticeships service, which is currently only open to large, levy-paying companies.

And the apprenticeships minister Anne Milton admitted at last week’s Conservative Party conference that she was “flabbergasted” that many large companies were unaware of the levy – even though they were paying it.

Lack of understanding and awareness of the apprenticeship reforms was among the reasons cited by respondents to the Manchester survey for why starts had fallen.

Other issues included the 20-per-cent off-the-job training requirement and the 10-per-cent employer contribution, both seen as barriers by some companies.

Meanwhile, roadblocks introduced by the government, including the introduction of a minimum turnover of £200,000 in the recent non-levy tender, have also added to the decline.

Mr Dawe claimed the results were further evidence that “ministers need to take an urgent look at the co-investment and 20-per-cent off-the-job training requirements”. 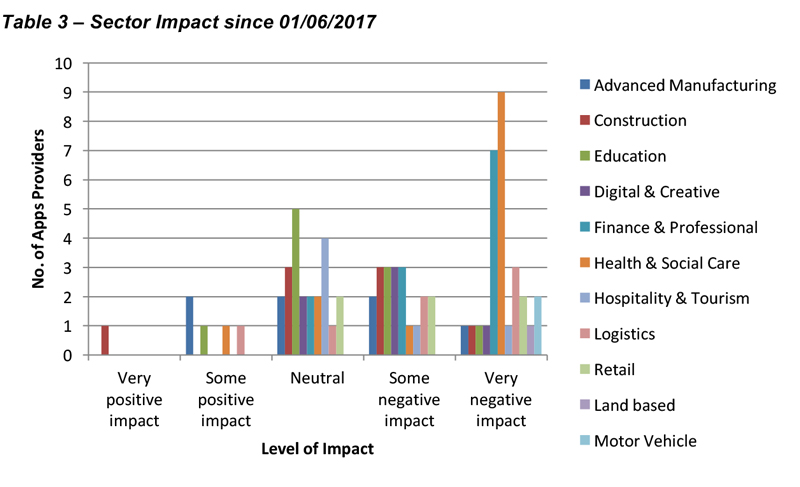