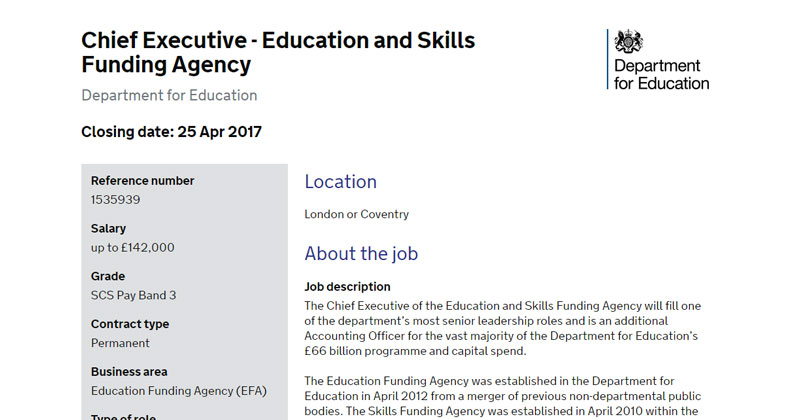 The search has begun for Peter Lauener’s replacement as head of the Education and Skills Funding Agency.

The job of chief executive of the funding agency, which will be formed through a merger of the existing Skills Funding Agency and Education Funding Agency on April 1, is advertised through the government’s civil service jobs recruitment site.

The job, which comes with a salary of up to £142,000, is described as “one of the department’s most senior leadership roles”.

It comes after FE Week reported on Tuesday that Mr Lauener would retire as chief executive of the newly-merged SFA and EFA once a permanent replacement had been found.

That news came after FE Week exclusively revealed the moves at the beginning of March.

The chief executive of the merged agencies will be an “additional accounting officer” for “the vast majority of the Department for Education’s £66 billion programme and capital spend”.

Applications are invited from people with “successful experience as a proactive, strategic leader operating in a large and complex organisation” and “a track record of delivering demonstrably successful organisational change”.

Among the agencies’ key responsibilities are to “manage the system to operate the apprenticeship levy”, to “manage a programme of post-16 area reviews” on top of managing school funding for children up to the age of 16.

The deadline for applications is April 25, with final panel interviews scheduled for early June.

Mr Lauener, who is also shadow chief executive of the Institute for Apprenticeships, has led the EFA from its inception in 2012 and the SFA since 2014.

According to the job advert, he had “pursued an agenda of developing shared services and joint teams over the last two years, even while the agencies were in separate departments”.

Consequently, “ministers have now decided that the agencies should be merged to maximise scope for further savings and for improving the quality of customer services and the effectiveness of all its functions”.

But, as reported by FE Week, the merger has raised concerns that skills and adult education could now drop down the list of priorities at a merged agency also focused on schools.