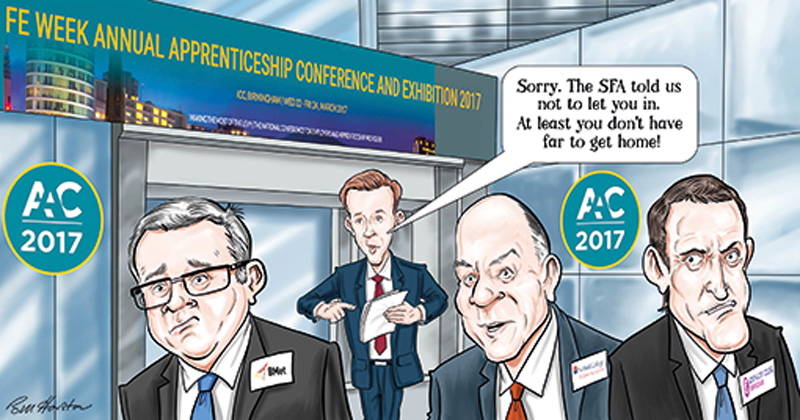 The nation’s second largest city may not have an FE college delivering apprenticeships when the levy launches in April, as none of its colleges has made it onto the new register of apprenticeship training providers.

Birmingham Metropolitan College, Bournville College, South and City College and Solihull College were all missing from the list published by the Skills Funding Agency on Tuesday – despite the four currently delivering almost £12 million worth of apprenticeships between them.

Several other major apprenticeship-delivering colleges have also failed to make the list, including Bournemouth and Poole College and Hartlepool College, both rated ‘good’ by Ofsted, and which have apprenticeship allocations of £5.6 million and £2.9 million respectively.

In all, FE Week estimates that at least 21 colleges that were eligible to apply, with a combined allocation of £44 million, did not make it onto the register.

David Hughes, AoC’s chief executive, said he was “concerned about the exclusion of some high-quality colleges from the register” and would be raising the issue with the SFA and the Department for Education “as a matter of urgency”.

BMet’s principal Andrew Cleaves told FE Week that “we are very surprised and disappointed by the outcome”.

He said that his college, which has the largest 2016/17 SFA allocation of all four, at almost £4.7m, had “put forward a solid proposal to the SFA” and had “grown significantly this past year”.

The college’s most recent Ofsted report was published Thursday (March 16) and gave the college a grade three overall, with a grade two for apprenticeship provision.

Bournville College and South and City College, which are currently in federation ahead of a planned merger later this year, have a 2016/17 apprenticeships allocation of almost £5 million between them.

South and City College received a grade two overall, including its apprenticeship provision, when it was inspected by Ofsted in December 2015.

But Bournville received a grade four for its apprenticeship provision during its most recent Ofsted inspection in September – which meant it was ineligible to apply for the register, according to SFA rules.

A spokesperson for the two colleges confirmed that Bournville hadn’t applied.

“However, we were very shocked to discover that the South and City College application had been unsuccessful, given our grade two Ofsted report and excellent track record,” she said.

“We are keen to understand why this was the case and have already sought feedback. It is our intention to reapply at the next possible opportunity.”

A spokesperson for Solihull College said it was “very surprised” not to be on the new register.

The college, which has an allocation of £2.3 million, was rated ‘good’ overall and for its apprenticeship provision at its most recent Ofsted inspection in November.

The college is “in discussion” with the SFA about “next steps and are awaiting a response”.

All four colleges were part of the Birmingham and Solihull area review, along with three sixth form colleges – none of which are on the register.

One of the outcomes from the review, which finished in March last year, was to set up an apprenticeship company.

According to the review’s final report, which was published in November, the company would “provide the first collaborative college-owned company delivering a dedicated service to employers to increase the range, volume and quality of apprenticeships in the Birmingham and Solihull area” and would be “driven by employer demand”.