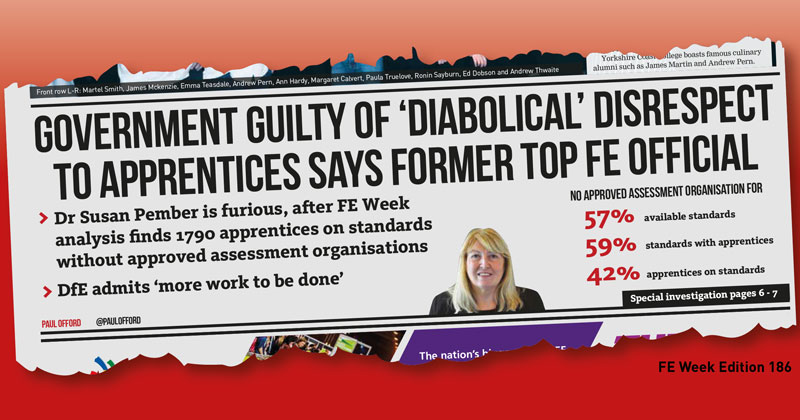 The proportion of learners on apprenticeship standards without an approved assessment organisation is dropping rapidly, according to new figures.

Statistics published in October showed 42 per cent of all starts (1,790 out of 4,240) until July had no assessment organisation to choose from – a situation that former top skills civil servant Dr Sue Pember described as “diabolical” (pictured).

However, FE Week has crunched the numbers in the latest government data, released on Thursday (January 26), and found that the proportion of courses without assessors had fallen by more than half to 18 per cent in October.

In all, 82 per cent of apprentices were on standards with at least one approved assessment organisation at the end of October 2016.

There were 9,550 overall starts on the new standards by the end of that month, which meant that 1,680 apprentices were still forced to start on programmes that didn’t have any end-point assessment organisations in place.

And 950 of these without an end-point assessor – representing 10 per cent of all starts – were on standards that had their first start back in 2014/15.

The lack of assessors is significant because all apprentices on the new standards, which are gradually replacing frameworks, are required to pass an end-point assessment to complete their apprenticeship.

These must be carried out by AOs that have been cleared for the task by the government, on the Skills Funding Agency’s register of apprentice assessment organisations.

Dr Pember told FE Week in October that it was “diabolical” to allow an apprentice “to start a programme without explaining not only what the end test will contain, but where it will be, what shape it will take and who will be the organisation to oversee and manage the process”.

There are currently 159 standards approved for delivery, of which 81 have at least one assessment organisation in place, while 78 are without.

So while the number of standards with an assessment organisation in place is rising, the proportion without is still hovering around the 50 per cent mark.

The latest statistical release included provisional data on apprenticeship starts between August and October 2016, as well as final data on starts from previous years.

It showed that the number of standards to have attracted at least one start has increased to 90 – up from the 56 in October’s SFR.

And while 35 of these standards have not yet secured an assessment organisation, compared with 33 in October, this represents a significantly smaller proportion than before – 39 per cent compared with 59 per cent.

Six of these standards had their first starts in 2014/15, meaning that some apprentices have been studying for more than two years without knowing how they will be assessed at the end of their apprenticeship.

A spokesperson for Jaguar Land Rover told FE Week: “Although EPA is outstanding, we are still very confident that the solution will be in place when it is required.”

A spokesperson for the bank told FE Week that it had no concerns about the lack of an end-point assessment organisation for the standard.

The Department for Education said in October that it was working with the Skills Funding Agency to encourage more assessment organisations to apply to the register.