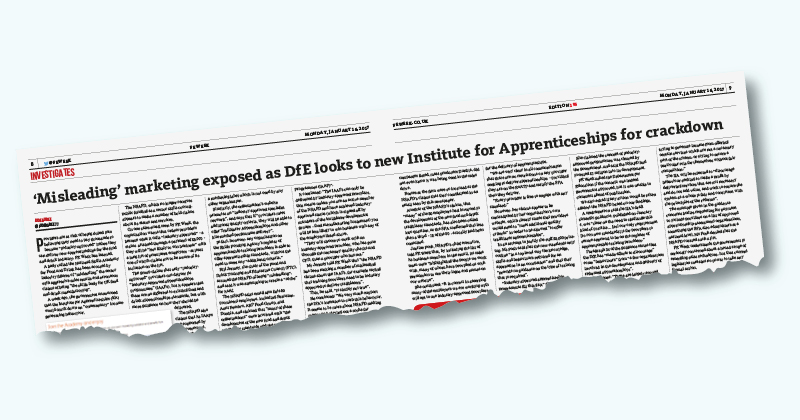 Ofqual will hold talks with an awarding organisation owned by the National Skills Academy for Food and Drink, over alleged conflict of interest “issues raised” through an FE Week investigation.

The qualifications watchdog announced its plans to intervene in the wake of our report that the NSAFD was misleading providers by trying to sell them costly “industry approved” status to run apprenticeships.

When we checked last week, there was no mention of its relationship with the NSAFD on OAL’s website.

However, the site claimed that the two qualifications were the only ones “written by the food and drink employer Trailblazer group” and “endorsed by the NSA for Food and Drink”.

FE Week asked Ofqual whether there was any conflict of interest in OAL claiming its qualifications were endorsed by the same body that owned it, whether NSAFD’s ownership of OAL had been made clear enough in the first place.

“In light of FE Week’s articles, we will be contacting OAL and will discuss the issues raised with them,” a spokesperson confirmed.

NSAFD, which bought OAL from the now defunct sector skills council for furniture and wood manufacturing, Proskills in July 2016, declined to comment on this latest twist in the story.

It claimed at the time that the purchase would allow it to “further support the food and drink industry through the awarding of industry-approved qualifications and focused end-point assessment products”.

FE Week’s investigation into NSAFD also found that providers were at risk of being duped into paying thousands of pounds to become “industry approved” before they could deliver new apprenticeships for the industry.

The only apparent difference between these programmes and existing apprenticeship standards – which can be delivered by any organisation on the Skills Funding Agency’s register of apprenticeship training providers – is that IAAPs have more guidance on how they should be delivered.

The NSAFD had claimed on its website that if “industry approved” providers met “additional quality criteria” they would “be able to offer Trailblazer Apprenticeships and other kite-marked programme delivery”.

Now, though, this claim has vanished from the NSAFD’s website following our investigation.

FE Week asked NSAFD if removing this key line meant it acknowledged it was misleading providers; it declined to comment.

The NSAFD also claimed that the development of its IAAPs had been supported by the former Department for Business, Innovation and Skills.

We asked the Department for Education, which took over responsibility for apprenticeships from BIS following changes to the machinery of government in July, if these claims were true.

“The employer ownership of skills schemes, such as those run by the NSAFD, were pilot projects, separate to the wider apprenticeship programme, that drew to a close in 2015 and are no longer funded by the department,” a spokesperson said.

“For apprenticeship training, we have been clear that as long as a provider has secured a place on the register, they will be able to deliver apprenticeships. Any activity that suggests otherwise would be misleading”.