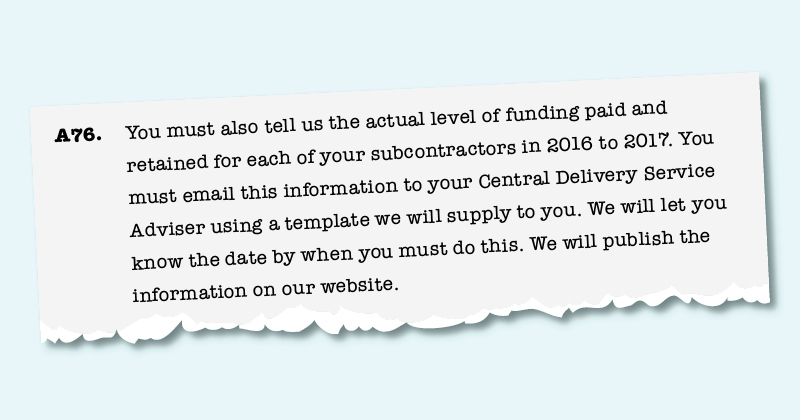 The crackdown on providers who fail to disclose how much they topslice from subcontracting contracts has stepped up a gear, after the Skills Funding Agency said it wanted to make the information publicly available.

Colleges and independent training providers have been required to specify their subcontracting management fees since August 2013 – but FE Week found four months later the rules were being ignored by a number of providers, including the country’s biggest SFA contractor Learndirect.

The SFA later threated to suspend cash if providers didn’t publish a breakdown of the amount of government cash they withhold for themselves before paying subcontractors to run training for them on their websites.

Now, however, the SFA has had its hand forced by the continued lack of compliance, and introduced an aggressive new measure requiring every provider to submit a new form revealing their figures.

The new guidance is very clear, stating: “You must tell us the actual level of funding paid and retained for each of your subcontractors in 2016 to 2017.

“You must email this information to your central delivery service adviser using a template we will supply to you. We will let you know the date by when you must do this. We will publish the information on our website.”

A spokesperson told FE Week that “providers will be given three months after the end of the financial year [April]” to submit their details.

The templates will also be “sent out in good time” to allow for them to be accurately filled out.

FE Week, which has campaigned to curb topslicing since 2011, found that just two of the top 10 biggest SFA subcontractors hadn’t yet published fees as of August.

The culprits were the Army, which said it was exempt from the SFA rules despite holding contracts worth £22,230,972, and the Construction Industry Training Board, with contacts valued at £20,601,396, which it said it did not publish because it doesn’t charge management fees.

Funding rules for the last academic year ordered lead providers to make “the actual level of funding paid and retained for each of your subcontractors” publicly available within 30 days of October 20, the closing date for submission of final 2015/16 individual learner records.

The latest figures available on Learndirect’s website, which is still the nation’s biggest subcontractor, showed that it kept £19,831,208 from its 64 subcontractors, 36 per cent of its £55,321,135 total SFA funding.

Asked by FE Week to justify why its management fees remain so high, a spokesperson said: “We work in partnership with an extensive range of suppliers, each providing contract-specific services, which complement those we provide directly.

“We offer a range of added-value services to our partners including data management, training, funder management, access to growth opportunities including regional and national employer relationships and inclusion in bids.”

While Learndirect has met the SFA requirement to publish management fees, the figure itself is uncomfortably close to the 40 per cent that SFA chief executive Peter Lauener has said he would find unjustifiable.

Mr Lauener told FE Week two years ago that he would find it “quite hard to see a set of arrangements that would justify a 40 per cent management fee, because it’s kind of obvious that what is taken as a management fee is not going to frontline education or training”.