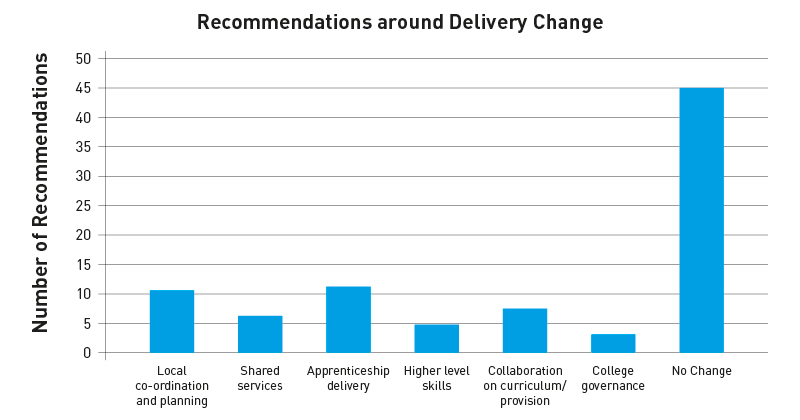 Most colleges involved in the first two waves of the area reviews will neither change nor merge, it has been revealed.

This lack of change was laid bare in the long overdue reports into the first 13 areas, which were finally published on Tuesday (November 29).

Just 21 mergers involving 45 colleges are proposed – while 45 institutions plan to stay as they are, and a further 29 sixth form colleges are looking to convert to an academy.

A number of failing colleges will remain alone, even though the stated aim of the reviews was to “create strong and financially resilient colleges”.

These include City of Bristol College, which was rated ‘inadequate’ during its most recent Ofsted inspection in January, and which has notices of concern from the Skills Funding Agency for financial health, financial control and inspection.

Despite this, the main recommendation for the college to emerge from the West of England area review was that it should “continue to stand alone whilst managing sustainable recovery within a ‘fresh start’ approach that will deliver financial resilience and substantial quality improvement”.

The financially troubled Central Sussex College was another to come out of the review process without finding a partner – although it has subsequently announced a plan to link up with Chichester College.

The cash-strapped provider announced earlier this year that it would close a campus due to sky-high debt, and Ofsted inspectors have since warned its future “remains uncertain”.

Relatively few colleges are making non-structural changes as a result of the area reviews, too.

According to a graph charting the various change recommendations, the most common recommendation made in the area reviews was for colleges to alter their apprenticeship delivery.

The graph, published in the November progress report sent to the national area review steering group, and seen by FE Week, suggested “the development of local ‘apprenticeship companies’ by colleges working together”.

The document also noted that most of the reviews included “at least one recommendation” setting out how to maintain the “collaborative working arrangements that had been established during the process”.

The reports were originally expected to appear in July, but it is understood they were held up following Brexit.

They cover 13 of the 15 reviews in wave one and two, missing London (west) and London (central).

It is understood that these have been delayed “to ensure the recommendations and outcomes of the four London reviews are coordinated during wave three”.

The apprenticeships and skills minister Robert Halfon said that the country needed “an education system that works for everyone”.

“That’s why we asked colleges, employers and other local representatives to review the FE on offer in their area and come up with recommendations to ensure employers and young people get the skills and training they need,” he said. “I’d like to thank all of those that took part.”

It said: “The outcomes of area reviews have focused primarily on proposed mergers to support financial sustainability or tackle inadequate provision. So far they have not focused on an objective rationalisation or re-alignment of curriculum provision.”