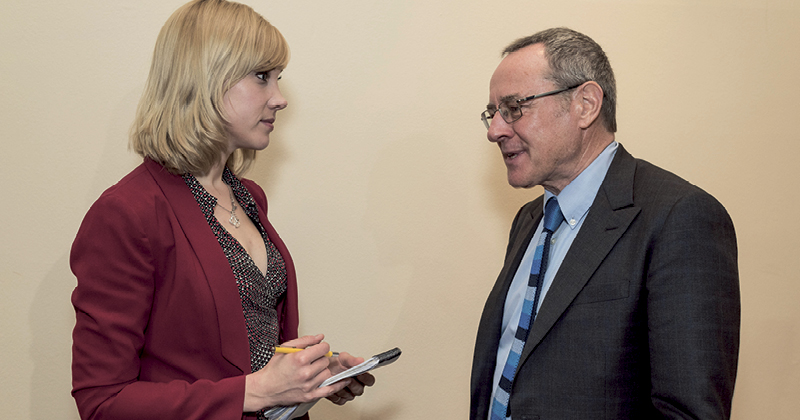 The new president of the Association of Colleges will dedicate his term in office to tackling what he described as the “massive increase” in mental health support needs of college students.

Speaking on day two (November 16) of the 2016 AoC conference, Ian Ashman (pictured) said “we are headed towards a crisis point in mental health”, which is being driven by “poverty”, “social media” and “exam pressure”.

He told the audience in Birmingham that an AoC survey on mental health conducted last year revealed that college leaders felt that “local services were simply not providing the support that students needed”.

“This year I want us to work together to challenge the stigma of mental ill health,” he said. “I want us to share the good practice across the sector in supporting good mental wellbeing, and I want us to drive a step-change in the level of support that government and mental health agencies provide to our students.”

After his speech, Mr Ashman told FE Week’s reporter Alix Robertson (pictured) about what motivated his new focus on mental health for the coming year.

“Colleges do fantastic work, but we’re seldom places where things are life and death,” he said.

“But I had a student once who said to me ‘I would not be alive today if it were not for having come to [Hackney Community] college and had that support’, which is an incredibly powerful thing to hear somebody say to you.

“The college went on the win the Queen’s Anniversary prize for its mental health work – we had an amazing day when we took the Hackney Community College van through the gates of Buckingham Palace alongside all these Rolls Royces from Oxford and Cambridge,” he said.

The interest that this experience generated made him aware of the need for a clearer strategy for mental health work in the sector.

“I got so many people from colleges saying to me ‘tell us what you’re doing; we’ve got these issues and we need to provide support’,” he said.

This, combined with AoC’s eye-opening mental health survey, brought the issue to a head – an astonishing 85 per cent of the college principals who responded confessed that the mental health needs of their students had gone up.

“At the AoC we’re now saying to government, ‘you need to make sure that when you’re giving guidance to local delivery people you are encouraging them to work with their college’.

“The national guidance too often just mentions schools; the 16-to-18 phase is often when the mental health issues become apparent.”

Currently, he said, more colleges are doing mental health first aid training but when young people are referred for support by college staff, around a third still “get nothing”.

By the time of the 2017 AoC conference he wants to see a number of things achieved in mental health.

“I would like to see government ensure that mental health is being given as much priority as physical health and the commitment to spend more in real terms on mental health services is honoured,” he revealed.

The post-16 area review process, and the mergers it has provoked, might also provide opportunities for improving mental health services in colleges, he believes.

“It not only offers the potential to share good practice, but if you are in a bigger organisation you are more likely to get the engagement of other public services.

“It’s the kind of things that two or three colleges coming together might be able to create some specialist support for, which individually they couldn’t do.”