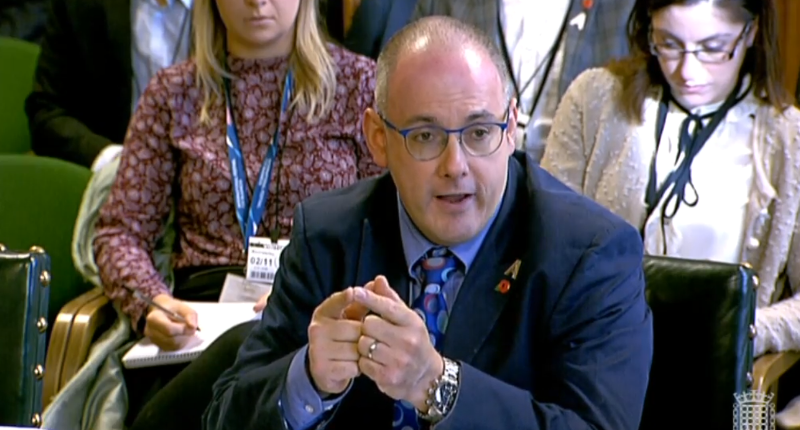 The apprenticeships and skills minister is “pretty sure” that no apprentices will get to the end of their course without an end-point assessment organisation in place.

Robert Halfon was grilled on the topic in speaking at a sub-committee on education, skills and the economy evidence session on apprenticeships today (November 2) in the Palace of Westminster, by co-chairs Neil Carmichael and Iain Wright, and Ian Mearns, MP for Gateshead.

He added: “I don’t think the picture is quite as bleak as it’s been painted in some areas.”

Mr Lauener told a packed audience at the Association of Employment and Learning Providers Autumn conference in Manchester that having no approved awarding organisations for over 40 per cent of learner starts on new standards is “not ideal” but the situation was “manageable”. David Hill, director of apprenticeships at the Department for Education (pictured right), who accompanied Mr Halfon at the evidence hearing, added: “Looking specifically at apprentices expected to be ready for their end-point assessment in the next 12 months, our analysis is that of those 1737 (86 per cent) already have at least one end-point assessment organisation ready for selection.

“That leaves another 278 apprentices and we’ve gone through exactly the status of those apprentices on different standards”.

He highlighted that for three apprenticeship standards, covering 40 apprentices, “we have organisations very, very close to being approved and we’re working with those organisations to get them on the register”.

Mr Hill concluded: “We’ve looked hard at this we are confident that we have a plan in place to make sure that there will be full coverage.”

In an FE Week article on October 14, Dr Sue Pember, who stood down as the civil service head of further education and skills investment in February 2013, said it is “diabolical to let an apprentice start a programme, without explaining not only what the end test will contain, but where it will be, what shape it will take and who will be the organisation to oversee and manage the process”.

Mr Dawe, also commented on the topic in an FE Week expert piece, when he wrote: “Having appropriate standards and robust EPAs are vital to the success of the apprenticeship programme and the development of skills in the UK.

“However feedback from AELP members suggests that while there are some excellent ones, this isn’t true for every standard developed and the damage that could be done to apprenticeships is far worse than the concerns around funding changes which we have had over the past weeks.”