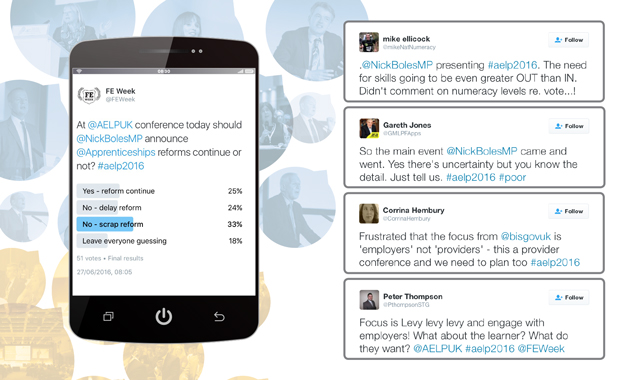 An FE Week Twitter poll on the opening day of the AELP conference asked whether Skills Minister Nick Boles should announce that apprenticeship reforms would continue or not post-Brexit.

Of the choices available, most opted for scrapping them — which was not a view shared by the delegates we spoke to (see below).

Mr Boles then indicated in his speech to delegates that the government planned to press on with plans for the levy due in April, and wider reforms.

We also asked conference delegates, and a selection of sector leaders, for their wider views on the British public’s decision to leave the European Union through the referendum on June 23.

Is the government right to plough on with apprenticeship reforms? Or should it pause – or even scrap them altogether? “I think pausing very briefly and just reconsidering the implications of Brexit. I don’t think it will make any difference; I think we’ll carry on. But now is a good time, if any, just to do a sense check.” “More than ever we need to have the opportunity for young people to be invested in. The timescales are very tight, but people are starting to gain momentum behind it now, and it would be foolish to abandon it at the last minute.” “There is certainly a lack of consistency in some of the messaging, so for that reason: stay on course, stay on target.” “Now that we voted to leave the EU there’s even more crucial demand for skills training, because a lot of the employment opportunities filled from abroad will now have to be filled by local people.” “We’ve waited long enough – we all need to keep the momentum going with our own teams and keep our own workforces stable.” “I think in the wake of all the uncertainty over Brexit, the sensible thing to do is to press on with policies you’ve already put forward.” “It helps to mitigate against panic reaction, and it’s a really
good thing that we’re going to be focusing on growing our own talent.” “The apprenticeship reform is unaffordable in the long term without that kind of employer contribution, but I’m still worried about the timing.” “I think we’ve known this is coming for a while and – while there is resistance – now we’re on that journey, I think abandoning or pausing it now would only throw everything into more tumult.”